Just in time for Oscar buzz, your intrepid art blogger drove to Richmond, Virginia to scope out the century of film costumes now showing at the VMFA. This sweeping exhibition, organized by the Victoria and Albert Museum, London, includes cinema costumes from private and archival collections. First seen at the V&A and in Melbourne, Australia, the VMFA is the only East Coast venue to mount the show.

Costume has power. As you walk among this extraordinary clothing—made deliciously voyeuristic by the fact that echoing in your head throughout is Matt Damon actually wore those trousers! Marilyn Monroe’s skin touched that dress!—it’s more than the second-hand star power that inhabits the costumes, it’s the magical creation of someone new, not actor or actress, but a character we all believe really exists. We see these icons as not only the movie stars who played them, but as Travis Bickle, or Scarlett, or Sugar Kane, or Harry Potter. In the dressing room, we’re told, an actor makes “not so much a change of clothes, as a change of skin.” 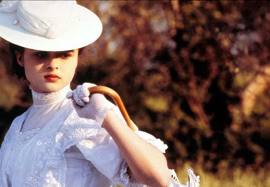 Lucy Honeychurch, from “A Room with a View,” 1985, by John Bright and Jenny Beavan

Look at Rose, “Titanic,” 1997, chic in purple pinstripes. In this costume, by Deborah L. Scott, 1997, she’s confident, if a bit demure, a well-bred young lady on an adventure. It’s all there.

Standing next to Rose is one of my all-time favorite characters, Lucy Honeychurch, played by Helena Bonham Carter in the 1985 production of “A Room with a View,” adapted from one of my all-time favorite novels by Henry James. This charmer, made of white cotton, linen, and lace is topped with saucy straw hat and accompanying parasol—a fresh young girl’s dress, perfect for the role.

Costume for “Atonement,” 2007, by Jacqueline Durran

Lounging nearby is the green vamp dress made for the Kiera Knightly character in “Atonement,” 2007, the acid counterpart to both Rose and Lucy. This secuctress was made “more naked,” by the use of laser cut patterns, according to Jacqueline Durran, its creator, allowing for a wide hem and more slippery movement. 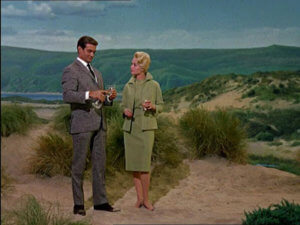 Edith Head and Alfred Hitchcock carefully selected another green for the Melanie Daniels character in “The Birds,” 1963. Generally I’m not a fan of interactive, video-laden museum display, with its cacophonous babble of conflicting sound, but this show is the exception. Here Edith Head and Tippi Hedren discuss this celadon number, accompanied by clips from the movie, a reel of Kodak film, and a vintage poster. The cool green suit, one of only three costume changes in the film, is pure Edith Head—simple and elegant, the perfect embodiment of the icy Hitchcock princess headed for a fall—and a pecking.

Costume from “Elizabeth the Golden Age,” 2007, by Alexandra Byrne

Around the corner, one is met with a spectacular array of historic queens. My pick: Elizabeth the Golden Age,” 2007, by Alexandra Byrne for Cate Blanchett—damask, velvet, linen, and ostrich feathers. Fabulous! But the stiff corset stay underpinning can’t have been fun, even for slim Cate. 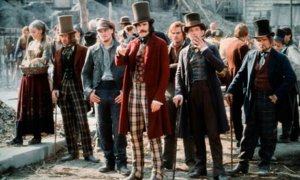 In another video interview, Martin Scorsese and Sandy Powell discuss how they came to create the fantastical costumes for “Gangs of New York,” 2002. Based upon a ton of research, the costumes are a blend of historical accuracy and pure fantasy. “Costume is character,” Scorsese says. Look at that hat on the Daniel Dey Lewis character, Billy the Butcher: it “cuts through the crowd” in an “imposing” fashion; the vibrant color, brocade vests, flamboyant neckties, all combine to create a hyper-vision of Five Points gangsters, where the intimidating bully meets the frock-coated dandy.

Soon we’re in Meryl Streep and Robert De Niro land: her costumes from “Mama Mia,” “The Iron Lady,” “The French Lieutenant’s Wife,” and “Out of Africa;” his from “Taxi Driver,” “Raging Bull,” “King of Comedy,” and “Casino.” Telling details revealed: Meryl wanted to know what would have been in Margaret Thatcher’s purse and insisted exactly those things be there in the bag she carried in the film. Consolata Boyle’s costumes, along with Meryl’s acting chops, combine to eerily channel Margaret Thatcher on the screen. 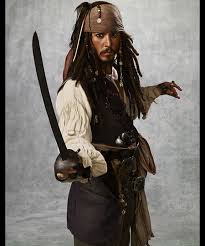 I’m less a fan of “Gone with the Wind,” 1939, than many of you may be, so I won’t dwell long on the lace mantilla, or the “Paris hat” Rhett gives Scarlett, but they’re here, along with scripts and other memorabilia. I also won’t dwell for long in the macho room (“Action and Suspense”) where costumes from “Sherlock Homes, a Game of Shadows,” “Brokeback Mountain,” “Flash Gordon,” and other super-heroes are displayed. Still, the quintessential rock n’roller, Jack Sparrow (costume by Penny Lane for “Pirates of the Caribbean: on Stranger Tides,” 2011), does deserve an admiring pause. Depp based the character, famously, on Keith Richards, as he put it, “a bit of a rogue, slightly hopeless and threadbare.”

Linger I did in the “Femme Fatale” room—who wouldn’t? Surrounded by the vampiest costumes yet. For the 1920 film, boldly titled, “Sex” (yes, you can get it on Amazon), this number, with its blown glass bead cape designed for Louise Glaum, was the earliest costume to be screen-tested. 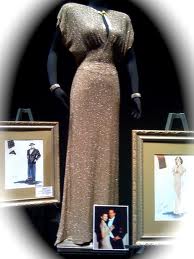 Next up, Annette Benning in “Bugsy,” 1991. Created by Albert Wolsky, this dress—see-through when backlit, remember?—used nine pounds of glittering silver beads. And who can forget that leg-crossing moment in “Basic Instinct,” 1992? Here we see Ellen Mirojnik’s stunning design for Sharon Stone. And if that doesn’t stop the show for you, take in Marlene Dietrich’s tuxedo, designed for the 1930 “Morocco” by Travis Bandon.

Sharon Stone in costume by Ellen Mirojnick for “Basic Instinct,” 1992

Should you go—the show is up until February 17, 2014, then it’s off to some undisclosed West Coast venue—do also take in “Made in Hollywood: Photographs from the John Kobol Foundation,” through March 10, a trove of 93 myth-making shots of Greta Garbo, Joan Crawford, Audrey Hepburn, Grace Kelly, which gives equal time to such hunks as Clark Gable, Marlon Brando, Rock Hudson, and Gary Cooper.

Just under the wire—I managed to see this show at the Smithsonian’s National Museum of American Art, the Portrait Gallery’s conjoined twin museum, before it closed January 5. The title of the show—marking the 30th anniversary of the American Art museum’s photography collection—comes from Walt Whitman, who believed that photography was an ideal new medium for the expression of the peculiarly American democratic spirit. Ranging from daguerreotypes to contemporary new printing techniques, the images shown ranged from traditional documentation—portraiture, odd genre scenes from pre-civil war South, even mug shots—to experimentation, and all the possible permutations in between.

The show was organized by category: American Character, Spiritual Frontier, America Inhabited, and Imagination at Work.

An easy choice for the American Character section is Diane Arbus’s “Patriotic Boy with Straw Hat,” 1967. With his sweet big ears and empty eyes, this fellow seemed an easy target for Arbus’s acerbic and mocking eye. Too easy a target, in my view.

Kevin Bubriski’s searing image from his “World Trade Center Series,” 2001, hits the viewer with the raw emotion of those awful days. Rather than focus on the falling towers or their smoldering ruins, Bubriski turned his lens on the spectators whose shock and horror mirror our own.

Annie Leibovitz’s “Marian Anderson’s Concert Gown,” 2010, printed 2012, is strangely moving. Made of five different images, it reads as a kind of funerary relic. The dress, tagged #35 (why?) becomes anonymous unless you know Marian Anderson’s body lived and sang inside it. Flowing from right to left, the fabric, with its red swath, appears to wave, flag-like. This odd combination of alive/dead, clothing/relic, specific/general, personal/anonymous makes the image absorbing. As you take it in, you see Marian Anderson singing on

the steps of the Lincoln Memorial and, while Anderson didn’t wear the dress on that auspicious day, you suspect the artist intended the memory to pop up.

In 1954, Swiss-born Robert Frank applied for a Guggenheim fellowship to create an “observation and record of what one naturalized American finds to see in the United States.” Iconic photographers Walker Evans and Edward Steichen wrote references. Frank got the grant, and headed out in a used Ford to photograph life in America. I’m not sure if this moody image—“Butte, Montana,” 1956—is part of Frank’s brutally unsentimental series of resulting from this road trip, but I suspect it is. Published as “The Americans,” in 1959, the book, both reviled and revered, had a profound impact on the direction of modern photography and inspired legions of photographers, Ed Ruscha and Joel Meyrowitz among them.

Pioneering color photographer, William Eggleston’s “Tricycle, Memphis,” 1975, printed 1980, echoes Frank’s vision of off-the-grid America, but now in a bright bleached palette, a distorted child’s eye view of an anonymous suburban enclave. The placard accompanying this photograph tells us that Eggleston started experimenting with color photography in the mid-60s and printed this image as a dye transfer print, a method usually used for advertising and fashion, with the intent of making it appear as an amateur photograph. 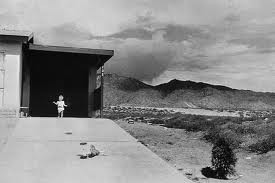 Hung next to “Tricycle,” is Garry Winogrand’s “Albuquerque, NM,” 1958, printed 1974—a genius pairing. “I photograph the world to see what the world looks like photographed,” Winogrand enigmatically said. For this haunted image, he used a pre-focused snapshot camera to create “the illusion of a literal description of how a camera saw a piece of time and space.”

In the Spiritual Frontier section, Eadweard Muybridge’s “Valley of the Yosemite from Union Point,” 1872 captures the grandeur of the West—and Manifest Destiny. Amusingly, we learn that the photographer was known to chop down trees to get the

The sublime “Goodyear #5, Niagara Falls, NY,” 1989, by John Pfahl was shot as part of a project focusing on old refineries and power plants in which he found a “transcendental connection between industry and nature.” Indeed.

In startling contrast, “Marina’s Room,” 1987, by Tina Barney, is a present-day vision of parental indulgence and a lush display—amidst the sensual delight of those ribbons, those textures, that excess!—of wealth and love.

The chilling image by the great train photographer O. Winston Link’s “Living Room on the Tracks, Lithia, VA, December 16, 1958,” printed 1984, is a fitting companion to Barney’s intimate scene, and its polar opposite.

Imagination at Work yields “Portrait of my Father with Newspaper,” 1986, by Larry Sultan, part of an eight-year project documenting his parents’ lives. The project was spurred by his discovery of a box of home movies. I love this portrait, with its subtle insight into the relationship of son and father, as well as the suffused light emanating from the newspaper frame.

Lovers of photography, me included, never tire of Edward Weston’s sculptural images, such as “Pepper No. 30,” 1930. Teetering on the edge of a cliché but still not quite falling into Georgia O’Keefe skull territory, this image has all the mass

and power of a Henry Moore Sculpture. 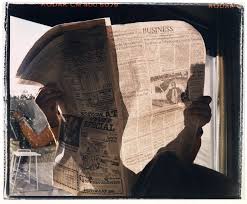 “Portrait of my Father with Newspaper,” 1986, by Larry Sultan

Teasing the photographic process into new realms, Ellen Carey’s “Dings and Shadows” series exposes photographic paper to light through colored filters. Next, the artist folds and crunches paper, exposing it to light from a color enlarger, then flattens it out again to be processed. The fascinating result is a new kind of painting using vivid color and texture.

Even though the show has closed, if your appetite needs further whetting, drag out your tablet and feast on the images at the Smithsonian’s American Art Gallery’s excellent website: