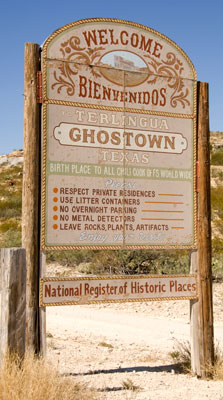 Following my last blog post on Donald Judd’s Chinati Foundation in Marfa, TX, we move on down the road to tiny ghost town, Terlingua. Once a thriving mercury mining town on the way to Big Bend National Park, Terlingua is now occupied by a few dozen living inhabitants who have moved into the falling down structures and rebuilt or expanded the shells of adobe brick.

The town’s denizens hang out and drink the excellent coffee at La Posada Milagro, also built into a ruin. Here we were delighted to find French press coffee, freshly squeezed orange juice, and the best breakfast burrito we’d ever tasted. In the cool of the morning both locals and tourists moved into the sun to wait for the day to warm up. In response to “Where y’all from,” we’d been saying “Virginia,” to avoid being blamed for the government shut-down which had closed the national Big Bend park, the reason many of our fellow coffee-drinkers were in Terlingua in the first place. 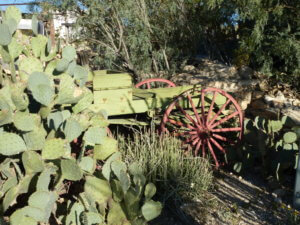 One of the local cowboy types, now the manager of Terlingua’s Holiday Hotel, we overheard, strolled over to the group of hikers and, indicating the Hebrew letters of one of the young men’s tattoo, greeted him in fluent Hebrew. Turned out the young guy’s tattoo was “a mistake on my way to Iraq” and that he was not conversant, but our cowboy hotelier was raised in an orthodox family in Atlanta. Love it when our expectations are turned on their heads! We also met a young British couple visiting from Cambridge who were staying in the charming guest house attached to La Posada Milagro and described it as “shabby Texas chic.”

Refreshed, we set out on a self-guided walking tour. Perched on the top of a hill is the charming old church, now restored lovingly by local families. The little structure, with its simple altar and homey artifacts, reminded us that we were just across the Rio 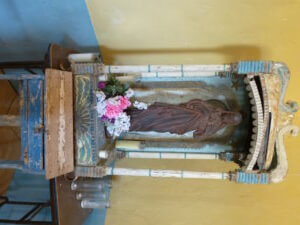 Grande and its “big bend” from Mexico.

The trading post was full of wonderful stuff. Here again, Mexico was vividly on display, with varied Day of the Dead artifacts everywhere. Disappointed not to have seen a local “javalina,” or collared peccary, a pig-like creature native to the Southwest, we consoled ourselves with this little fellow outside of the store. 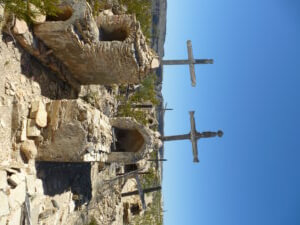 We lingered in the grave yard for easily an hour, fascinated by the touching, spooky, and inventive grave markers. Many are highly personal, with favorite belongings of the deceased arrayed beneath the markers. 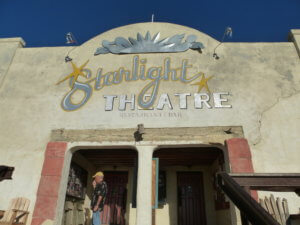 Featuring such delicacies as chicken-fried antelope with Lone Star Beer gravy and wild boar and venison sausage stuffed with jalapenos, the Starlight Theater and Restaurant clearly deserved a follow-up visit that night for dinner and some Texas two-step. Terlingua is the home of not one, but two “original” chili cook-offs, so we figured the chili would also world class. Not to mention all the local craft brews on tap. We were not disappointed. 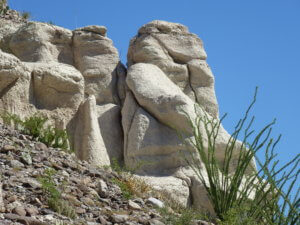 Inspiration is everywhere in this surprising part of the world. Local “hoodoos” abound (see my earlier blog post, “Hike the Hoodoos” featuring hoodoo brethren in Utah); a state park slot canyon offers a cool, even in midday, hike; and roller-coaster roads suddenly buckle up out of the flat landscape.

The pace is slow, the skies wide, and the stars thick at night. You can even race a Shelby Mustang or play a round of golf beneath the majestic Chisos mountains at the nearby Lajitas golf resort. Don’t want to drive all those grueling desert miles to get here? Fly into the Lajitas International Airport! You’ll just have to get permission to land there first. 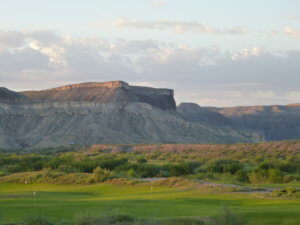 “Hoodoos” are pillars of dramatically shaped colored stone, like armies of Chinese terra cotta warriors marching along a vast pink and salmon amphitheater. These fanciful creations, made by millennia of erosion and geological forces, cast a spell on all who visit. When my husband Richard and I were recently there, we might well have thought that the native language of the Hoodoos was French, given the legions of French people in rented caravans who flocked to gasp Gallicly at the magnificent scenery. We also encountered delightful Dutch families on spring school leave, resolute Germans, a few Italians, and tight formations of Asians, swathed in layers against the bitter 30-mile-an-hour winds and temperatures barely into the 40s. Americans were decidedly in the minority.

The scouring winds made the air bracing, clean and fresh, scented with ponderosa, pinion pine and juniper, and the night skies thick with stars.

This land was named for Mormon pioneer Ebenezer Bryce who came with his family in 1875 to build settlements, a road to the plateau top, and ultimately, an irrigation canal, created by diverting the Sevier River—by hand.

We stayed in a charming 1920s vintage cabin, one of several not far from the rim of the canyon. The Lodge, now on the National Register of Historic Places, was built by the Union Pacific Railroad with the intention of making Bryce Canyon part of their new loop tour of the southwest. The Lodge itself is a rustic charmer, with faithfully reproduced pine furniture grouped around the massive stone fireplace. The food was surprisingly good in the dining room – elk chili, perfectly seared tuna, “Ebenezer’s trout,” quinoa and roasted vegetables.

Hiking around the rim, I met a woman from Paris, a painter, and when I asked her if she planned to paint what she’d seen and photographed, she said, “I’m an abstract painter, so no, not the canyon, but ah, yes, the colors! The pinks!” It was far too windy and cold to sketch, and after several hours on the trail, we retreated to the Lodge to read and doze in front of the roaring fire.

Sunrise is magnificent here—but then, so is sunset—lighting or extinguishing the hoodoos one by one, or in clusters. Just be prepared to bundle up, unless you’re here in August. A fleece, gloves, a down vest, hoodie, and even earmuffs would have been welcome!

You can easily fill a day or two, driving to viewpoints around the park, or to Mossy Cave Trail, an easily managed hike along “Tropic Ditch,” the canal carved in 1892 by those intrepid Mormon settlers. Even now, it provides water to nearby Tropic and Canyonville. Snow was still melting in the cave at the end of the trail, while wild flowers were just beginning to make an appearance in the valley.

Should you come, be sure to drive “Scenic Byway 12” where you’ll see the Red Canyon, Grand Staircase-Escalante National Monument, and more – miles and miles of jaw dropping panoramas, no two alike: enormous boulders that looked spray-painted in bands of chocolate, pale green, purple, magenta; lunar grey and cream landscapes; bizarre “melting” rocks that had us exclaiming, “Look! Jabba the Hut!” or “Gaudi!” or “Henry Moore!” Everywhere are living sculptures you’re tempted to name, and indeed, should you venture further to Arches or Canyonlands National Parks you’ll shed your Bryce layers and hike out to meet The Three Gossips, Sheep Rock, Balanced Rock, and Delicate Arch—where “Indiana Jones and the Last Crusade” was filmed.

Richard and I at the Lodge, Bryce Canyon

After a day of hiking you’ll be ready to roll into nearby Moab and slake your thirst with a Hoodoo Ale.