Up until this summer, I’d seen only one or two of Joan Mitchell’s paintings and they were always hung with other painters’ work. Thanks to my friend, Bonnie, who invited me to join her at the Mitchell retrospective at the Baltimore Museum of Art, I might not have found an artist who has become an inspiration in my life – not that I’m flinging paint at canvas, although it’s tempting. I’m trying, in a quieter, smaller way, to find my own version of her path, which combined a deep immersion in nature, music, and poetry, and resulted in some of the most exuberant, courageous, and original art I’ve ever experienced.

Digital versions of Mitchell’s monumental paintings will only give you a suggestion of the real thing, like a baseball card compared to a living, breathing athlete in action. But it’s what we have, so here goes.

This stunning retrospective (co-curated by the San Francisco Museum of Modern Art and the BMA) is organized chronologically, so we see Mitchell’s early art in the first room. Born in 1925 to a wealthy and cultured Chicago family, young Joan studied (as my father did a decade or so before her) at the Art Institute. Several of these early works are breathtaking: “To the Harbor Master” (1957) and “The Bridge” (1956; the first of her many diptychs) among them, but the one that stopped me in my tracks was “Hemlock,” (1956). I hadn’t looked at the wall plaque, so didn’t know the title immediately, but instantly felt its stately tree-essence. The crisp, fragrant boughs (somehow the painting seemed to give off a wintry, evergreen scent) are set off by a snowy white field, the sweeping branches speckled with blue, orange, and crimson, like flashes of birds pecking at the tree’s base.

The title comes from a Wallace Stevens poem, “Domination of Black.”

“Out of the window, / I saw how the planets gathered / Like the leaves themselves / Turning in the wind. / I saw how the night came, / Came striding like the color of the / heavy hemlocks. . .”

At that point, I was hooked. 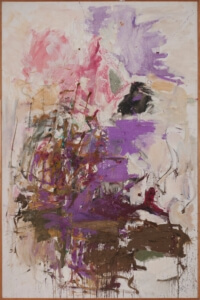 In the second room, I was equally floored by “Untitled,” (c. 1961). Nearby hangs a photo of Mitchell in her Paris loft—by now, she was splitting her time between New York and Paris. In New York she’d become a known artist in the emerging abstract expressionist vein, including Elaine de Kooning, Helen Frankenthaler, and Lee Krasner, among others. The scene in New York was intense, and increasingly, Mitchell sought the relative obscurity of Paris where she felt comfortable following her own muses. “Untitled” is like the flip side of “Hemlock.” The brooding green/black is gone, exploding in Easter egg color, as if the artist said, “Oh, what the hell,” as she squirted magenta directly from the tube onto the canvas. This bloom of color seems to emerge from a muddy ground of splotches, drips and fishtails of paint. Mitchell appears to revel in improvising with the paint: making flicks, swirls, dabs. The black blob rescues the lilac from a too-pretty realm, giving it heft and balance. I was soon lost in the ravishing tangle at the left, marveling at the artist’s freedom with the splotchy slaps of turquoise, crimson, ochre, white, plum, and jade. Experiencing this painting results in an upwelling of feeling as one’s sightline is drawn up to a pale sky. 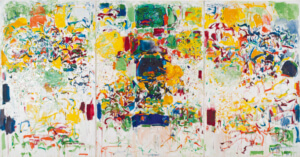 As you enter the next room, you’re greeted by an enormous triptych, “Sans Neige,” 1969, painted after Mitchell had moved from Paris to La Tour, her estate along the Seine in Vétheuil, France. Coincidentally, or perhaps by design, Monet, one of the painters she most admired, lived and painted in a cottage on the very same estate. The curators at the San Francisco Museum of Art speculate that the title, “Without Snow” in English, could be a “sly reference to Monet’s well-known paintings of Vétheuil in winter…” Unlike “Hemlock” and “Untitled” which evoke the majesty and exuberance of nature, this work plunges the viewer into a bustle of human life. It’s a show-stopper, a brilliant carnival whirl of crowds, activity, the swirling life of cafes, whipping flags, even animal tracks, weaving among the grounding rectangles of crimson and blue. It’s irresistible, joyous, and celebratory of human life.

In the next gallery, a video shows Mitchell welcoming an interviewer into her La Tour studio. The two women sit on a bench by the window and gaze out at the magnificent view of fields, the town, and the river. The interviewer says something like, “How wonderful it must be to look out this window and paint.” Michell replies, gesturing at the view, “Oh, I could never even try to paint that…” Rather, she says, she closes the shutters to paint, preferring to conjure memories of times, places, people, and nature, carrying her landscapes with her. 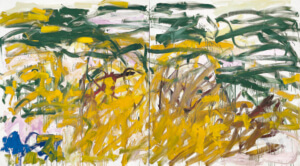 We can’t know why there are no birds in “No Birds” (1987-88), even if we can guess why there’s no snow in “Sans Neige,” but Mitchell’s intent to pay homage to Van Gogh’s “Wheatfield with Crows” (1890), is clear. Made late in Mitchell’s life when, diagnosed with cancer, she was often in pain, this startling work seems to reveal that she, with her typical courage and honesty, is facing her mortality. It’s as if the absent crows have left black contrails in Mitchell’s painting, and Van Gogh’s vivid blue sky is now a crouching pool at the far left. But the bright yellow field is vibrant, the wheat stalks burst forth from the horizontal ground, and the turbulent movement speaks to me more of life than death. At La Tour, Mitchell spent many hours with her artist friends, among them composer Gisèle Barreau. The two spent countless hours listening to music and playing it together. “Two Pianos,” 1980, is named for a Barreau composition, also 1980. I looked it up on YouTube, but found only this video of a performance of “Blue Rain,” 1998, for two pianos and percussion. You can listen here: https://www.youtube.com/watch?v=DrrXz6ZOWLE.

“Blue Rain” was composed six years after Mitchell’s way-too-early-death at 67. Listening to Barreau’s music, though, I can picture the two women playing together, perhaps with Mitchell’s beloved dogs at their feet. It’s tempting to see two different personalities in the two sides of the diptych, one spare, pale, and diffident, the other dense, rich, passionate, and persistent. Of course, one can also “see” the music dancing before your eyes and revel in the back and forth between the “two pianos.” 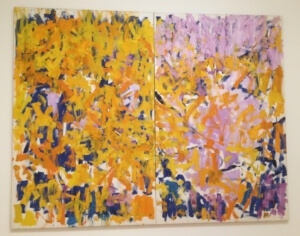 In addition to these and many more wonderful paintings, the show offers a trove of ephemera: sketch books, correspondence, photographs, the video shot at Vétheuil, and one of Mitchell and friends sailing in the Mediterranean. Some small works balance the monumental ones, too, especially a wall of ravishing pastels made directly on paper with typewritten poetry by friends.

The Joan Mitchell retrospective at BMA is up until August 14, 2022. If you possibly can, do try to see it.