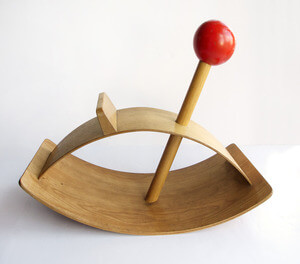 Down the hill from the Philadelphia Museum of Art is the companion Perelman Building, a 1927 Art Deco gem with light pouring into its cathedral-like entrance, expansive galleries, and an inviting café with outdoor dining space. Take the shuttle bus (walking across the busy boulevards in this part of town can be hazardous to your health), to see “Design for the Modern Child,” a fresh look at children’s design: furniture, wallpaper, dishes and eating utensils, toys, books, and—of course—video games.

Often the most “modern” design seen here is 50 or 60 years in the past, as with Gloria Caranica’s 1965 Hobby Horse, designed for Creative Playthings in Princeton, NJ. This traditional toy has been reduced to its most basic elements, with all but the fun removed.

Many items have more than one use, encouraging the child to engage with the piece in a creative, fluid manner. A 1957 beech plywood laminate “chair” can be used as a table, rocker, nightstand or display shelf by fitting the removable panels into five different pairs of slots. Designed by Kristian Vedel, a Dane, this morphing piece of furniture is still in production and can be found at Module R for a mere $560.00. Or maybe on e-Bay? Another classic, the polyethylene stacking chair by Marco Zanuso and Richard Sapper, 1961, can also be used as a construction toy, and is the signature image for the show.

Giant House of Cards, 1953, by Ray and Charles Eames

Equally simple and appealing is the giant house of cards by American mid-century design icons, Ray and Charles Eames, 1953. Also still in production, these cards can be put together to form 3-D shapes to suit any child’s fancy. The striking designs on the cards are meant to “inform” and “inspire” the child, but the average parent or grandparent might find that a bit far-fetched. Hey, they’re just fun to play with! (A new version is available on Amazon.com for $55.00)

The Bo Boo fabric, printed cotton by Katsuji Wakisaka is as charming as it was in 1975 and is also still sold in Merimekko stores and on-line.

Who can resist the “Pursuit Plane,” 1941, hanging from the ceiling? Made of metal, rubber, and plastic, it was designed by Viktor Schroechengost (American), and, actually a pedal car, it was destined to remain solidly on the ground.

“Sixteen Animals,” by Enzo Mari (Italian) in 1957, are beautiful standing alone, but they also cleverly join together to form a single rectangle. Merging and joining seems to be a theme here, as with the “Klick” desk, a more recent design (2007) made of birch plywood in which the chair and desk form a cube when fitted together.

Of the newer designs, a stand-out was the 2004 wardrobes designed by Marie-Louise Groot to echo the shapes of the townhouses in her native Holland. I am in love with these things and wish there was some way to shoe-horn them into my house, or my grandson Sam’s room, but alas…no room for more houses. . .

Looking like soul-mates to toys from a much earlier era, the Sibis Max Push Car and its adorable trailer, were designed in 2004. Made from ash, rubber, and plastic, by Wolfgang Sirch (German). Both can be found at the Cooper Hewitt Store. Not cheap, admittedly, but then you don’t need to buy gas.

2004. Made from birch, Plexiglas and beach wood (for the ultra-simple furniture—often nothing more than a suggestion of a bed, a simple slab with a bolster made of round doweling), this elegant yet austere abode may or may not inspire a young child’s fancy.

Another creation seemingly aimed to please adults is Linda Sternberg’s (Danish) dollhouse, 2009, made from wood, metal, after Arne Jacobsen’s house. This ultra-minimal, Bauhaus-y construction is filled with—what else?—Jacobsen’s “egg” and “tulip” chairs. Aside from a couple of abstract designs on the dining room walls, much is left to the child’s imagination, or the wink and nod of the die-hard mid-century buff.

As you’re wandering among these delightful objects, the clanging, beeping, twanging, and boinking of the electronic games causes you to finally investigate. Running in succession are Tetris, Super Mario Brothers (I flashed back to my step-daughter Laura on our sofa with her—was it a Game Boy?) and, the latest entry, Angry Birds. Up until I saw the very irritable birds (various species, various guises) smashing and crashing into brick walls, turrets—every imaginable construction—to unseat and presumably vanquish some hapless pigs, I had only seen my grandson Sam’s inert plastic toy birds.

Ho hum, unless I’m missing something, I’ll stick to their charming 1959 doppelgangers. “Birds,” made of oak and designed by Kristian Vedel. They are not angry. At all. (Available for purchase in the Perelman’s gift store, or at canoe.com for $49.00 apiece.)

On view until October 14, 2013. http://www.contemporaryart.com/philadelphia-museum-of-art/design-for-the-modern-child/ 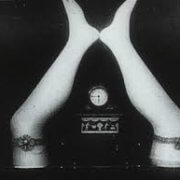