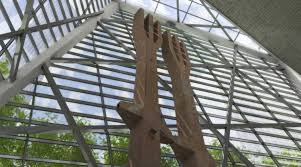 We each bring our memories of that terrible day with us when we return to ground zero. No matter how far away, or how close we were to that place on that day, our lives were changed. And now, more than a dozen years later, there is all that took place after—war, turmoil, and divisive feelings that still roil the country. With all that in mind, and with very few reservations, I think the founders, designers, curators, and many advisers who created the National September 11 Memorial Museum have done their job well. They have managed to incorporate myriad experiences of those horrific events in a way that memorializes the dead while it pays tribute to the heroism of those who ran into the ruptured buildings hoping to save as many lives as possible.

The architect, Davis Brody Bond, has designed a sleek asymmetrical box above ground, mirrored by an enveloping below-ground space. Defined by the existing slurry wall, the below-ground space is in part a memorial to the building itself. As the museum’s website puts it, “Where most museums are buildings that house artifacts, this Museum has been built within an artifact.”

As you descend from ground level, you pass the stark remains of two Trade Center tridents soaring up into the glass atrium. Once on the concourse lobby level, you enter a series of displays in which you hear the voices of people describing that day—where they were, how they heard about the attack, what they saw on television, the phone calls they made, or tried to make. 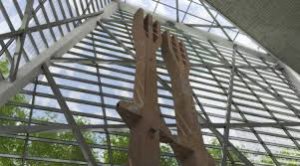 You continue your descent past twisted girders, a section of the steel facade, large photos of the towers at twilight, until you reach the epicenter of the 1993 bomb blast, the B-2 level of the parking garage, where you’re reminded that the bombers wanted to take the building down.

The “survivor stairs,” a portion of the Vesey Street stairs that allowed some to flee the North tower across the plaza, lead into the Memorial Hall, a vast space intended for contemplation and reflection. This space occupies the area between the two towers, filled top to bottom by the commanding presence of the slurry wall. Had the wall not held after the attacks, Hudson River flooding would have caused even more destruction and loss of life.

Vast architectural artifacts dominate the space: box column remains, the radio tower from the north tower, an elevator motor, a twisted column from the South tower, its welds split open.

Perhaps the most arresting feature of this cavernous space is the “last column,” which was signed by first-responders, emergency crews, craftsmen, among others, and on which were posted photographs and other memorabilia of those lost. Accompanying the column is a pedestal with an electronic display that allows you to zero in on each message or photo to learn more about the signer or poster. This completely absorbed us and we read every one. It added the human element which, at that point, had been missing. You can see a video here: http://www.911memorial.org/images-videos/video/last-column-symbol-resilience 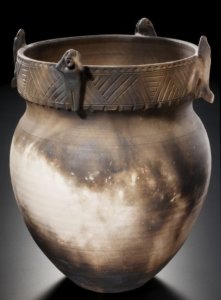 On the walls and in cases are various pieces of art commemorating the event—some more successful than others. “9-11 Effigy Pot,” 2001, by Onondaga/Seneca artist Peter B. Jones, was one of the standouts.

I certainly could have done without the Bank of America-sponsored “Tribute Walk” in which you hear the names of the dead being read as you pass. Fine to have sponsored the walk, but did they really need to take the credit in the sanctity of a memorial?

That aside, behind a somewhat unheralded revolving door, is the heart of the museum. Here, the displays take you forward in time from the horror of the attacks, to the events leading up to that day, to bin Laden’s killing, and end with some reflection on the present-day challenges of a post 9/11 world.

Items recovered from the site pulled us in and we lost all sense of time and place. Although crowded, the display is well designed, allowing you to move through the labyrinthine space at your own pace. Almost unbearably sad were the small theaters which featured films accompanied by recorded voices of those who were there: messages left by office workers who returned to the South Tower, having been told they were safe, one of the flight attendants on doomed flight 93, spunky to the last, and a passenger who urged her husband not to worry about her, that she was comfortable…for now.

Many of the pieces are monumental (a slab of “composite,” made up of five cmpressed stories of one of the towers), many are intimate—a ring worn by a woman who survived the 1993 bombing, buying the ring for herself to commemorate the day, only to perish in 2001. The museum is full of such small, heart-stopping moments, along with the huge artifacts of riven steel. 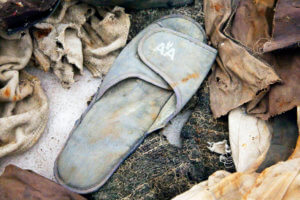 We emerged dazed, realizing we spent seven hours, all told, in the museum.

If you go, we suggest entering the revolving doors first—this multi-faceted display will deserve all the time you can give it.

Then, maybe after a coffee in the rather spartan cafe, you can take in the larger space in the time you have left.