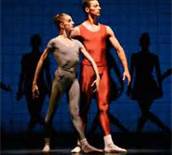 My fellow balletomane and dear friend Susan and I enjoyed last night’s performance by the New York City Ballet at the Kennedy Center–a feast for all senses, and in all senses, a masterwork. The program opened with “Carousel (A Dance),” music by Richard Rogers, choreography by Christopher Wheeldon. Under carnival lights, a coltish Lauren Lovette, pursued by partner Robert Fairchild, swoons her way through young love while cheerleader-skirted girls romp with athletic guys on an imagined fairway.

The stand-out performance of the evening was the stunning “Glass Pieces,” music by Philip Glass, choreography by Jerome Robbins. The piece opens against a stark background, like an enormous sheet of graph paper, and as the music bursts forth, the entire corps is purposefully striding on and off stage, bodies crisscrossing, a pedestrian melee moving to Glass’s hypnotic pulses. Amidst this throng, suddenly couples unite, their matching leotard colors signaling that they are mated in some way, and fated to meet, even as the crowd continues to churn around them. In the second movement, solos and pas de deux take place against a black-silhouetted line of female dancers, swaying, stepping, marching, like a frieze on a Greek vase brought to life. Yet, that allusion aside, there’s nothing classical about this piece. It is an utterly modern fusion of art, dance, and music. We could have sat through it again and again, riveted.

The final piece, “Vienna Waltzes,” set to music by Johann Strauss II, Franz Lehar, and Richard Strauss with choreography by George Balanchine, was equally engrossing and demanded the same level of athleticism of its dancers who are constantly on stage and constantly moving. A full-blown romantic confection, this piece is strikingly different in its classicism and exquisite period costumes. The first act evokes the sweetness of a youthful prom taking place in the Vienna Woods, all swirling pink and cream. The woods part to reveal a flock of wood sprites in hellebore colors. Next comes a burlesque polka in which the couples—girls in saucy frocks dishing it up with their partners (in striped pants and

pompadour wigs that Susan described as “Bob’s Big Boy meets Liberace”). We gasped as the next scene was revealed: the last of the woods melt away and we’re in an elegant Belle Époque interior; a mysterious and seductive black-clad woman appeared among the swirling couples. She, pursued by all, chooses the natty red-jacketed cavalry officer as number one on her dance card. Finally, the scene shifts again, and, stag-horn chandeliers lit, the whole company explodes into an exuberant crescendo of whirling ivory skirts and black tuxedos, like calligraphy set in motion.