Each of the Smithsonian museums has a character of its own, but they all have one thing in common: that feeling of safety and calm, the way a sacred space must feel to the religious. At the Arthur M. Sackler Asian Art Gallery you descend below-ground to the gallery space, leaving the world behind, sinking into yourself, as you enter a new, sandalwood-smelling, realm.

“An American in London: Whistler and the Thames,” running now until August 17, 2014, is magical. The show gives us glimpses of James McNeill Whistler’s mid-nineteenth century London in all its gritty, booming tumult along an increasingly industrialized river. One of my favorite painters, I’d see any show of Whistler’s work, anywhere, any time. Here, as you walk from dusky room to dusky room, the painter’s evolution unfolds, with his earlier realistic images giving way to more and more impressionistic ones, as if the London fog is stealing into the gallery itself. 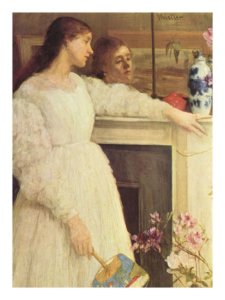 “Wapping,” 1860-64, depicts Whistler’s Irish mistress, Joanna Hiffernan, enjoying the company of a sailor and another man. Originally painted as a prostitute, the model is, after four years of reworking, an ambiguous, contemplative figure. The view from the porch of The Angel, a public house near Whistler’s own Chelsea rooms, gives out on the bustling wharf. Painted with painstaking detail, the realistic image makes you feel as if you’ve just arrived, joining the group to have a pint. All the painting-over seems to have muddled Joanna’s image a bit, as if her head is bathed in, or merging with, the light coming off the river.

In “Symphony in White, No. 2: the Little White Girl,” 1864, we see Joanna again, wistfully posed in Whistler’s porcelain and azalea-filled dining room. She holds a fan decorated with an image by Utagawa Hiroshige, one of the famous views of Edo (now Tokyo). Next to the painting is the woodblock fan print itself, “The Banks of the Sumida River,” 1857. The wall placard tells us this view is from the middle of the Azuma Bridge, a similar positioning to Whistler’s paintings of London’s distant Crenmore Gardens, with its nightlife, cafes, and fireworks.

“The Banks of the Sumida River,” by Utagawa Hiroshige

“Japonisme,” all the rage in France and Europe, was to have a profound effect on Whistler, who owned an extensive collection of Japanese woodblock prints, and who sought to incorporate characteristic Japanese compositional elements into his work. He enjoyed posing European models in “oriental” costume, as he does here in “Caprice in Purple and Gold: the Golden Screen,” 1864. Here Joanna is dressed as a Japanese courtesan, sorting through an array of woodblock prints. Hiroshige and Hokusai were “…the filter through which Whistler later re-envisioned the industrial views of London out his window.”

“Chelsea in Ice,” is the view from Whistler’s bedroom on one particularly cold February day in 1864. His famous mother, staying with him at the time, said she nearly froze to death as he painted, in a frenzy, with the window wide open. The slabs of ice are suggested by broad, flat brush-strokes, in his new gestural, almost abstract style.

The link between Japanese prints and “Nocturne in Blue and Gold: Old Battersea Bridge,” 1872-73, can be seen by comparing Whistler’s painting with Hiroshige’s “Bamboo Yards, Kyobashi Bridge,” 1857.

This painting—of Old Battersea Bridge—was the one I’d come to this exhibition to see. On loan from the Tate, London, this incandescent painting, draws the viewer in, the spray of fireworks overhead like something otherworldly. It’s encased in a gorgeous gold and turquoise frame that looks like it was cut from the wall of the famous “Peacock Room,” designed by Whistler for his patron, the shipbuilder Frederick R. Leyland, now reconstructed in the neighboring Freer Museum. The very informative accompanying notes tell us that Whistler first calls these ephemeral night visions “moonlights,” until Leyland suggested the term “nocturne.” Whistler defined the nocturne as a work valuable as art only, without any “…outside anecdotal interest.”

We can see what he was getting at here, a suggestive impression of urban night, but the prevailing Victorian sensibility was not prepared to follow where Whistler was leading. Indeed, the critic John Ruskin gave the Old Battersea Bridge painting such a scathingly bad review that Whistler sued him for libel in 1878. And won. Not that it made much difference to the public, whose tastes still ran to realistic, often moralizing pictures. Whistler’s style was so radical—with its almost monochrome palette, low perspective and murky aspect—that many had trouble making out what the picture represented.

From our perspective, the painting is itself a bridge, connecting the Victorian age to the age of modernism. 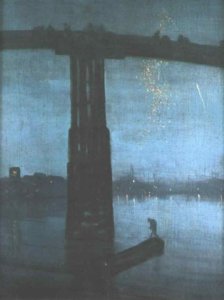 In Whistler’s words, he wanted to paint the point at which “…the evening mist clothes the riverside with poetry, as with a veil, and the poor buildings lose themselves in the dim sky, and the tall chimneys become campanili, and the warehouses are palaces in the night…Nature…sings her exquisite song to the artist alone, her son and her master—her son in that he loves her, her master in that he knows her.”