What a satisfying book! The writing is always engaging, never predictable. Henry and Mariah have become my close friends. Best of all, it’s a page turner!

Set in mid-1980s Washington, DC, Still Life with Aftershocks tells the story of 30-year old Mariah Boone as she cares for her dying older brother, Henry. As Henry’s illness progresses, Mariah is unwittingly drawn into a power struggle at her Arts Endowment job which proves to be far more explosive than a simple office peccadillo. When her abusive ex-husband violates his restraining order, Mariah manages to fend him off, but is left shaken and overwhelmed by increasingly violent flashbacks and dreams. Amidst this turmoil, Mariah dreads the inevitable visit by her parents—the famous painter father and rabble-rousing former Communist mother—from whom she and Henry have long been estranged. Throughout, friends Moss and Beth provide stability and support, but ultimately, Mariah alone must confront the long-buried family secrets that have shaped her life and Henry’s. 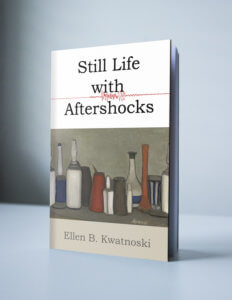 A family story that reads as a page-turner, Still Life with Aftershocks reminds readers that it’s never too late to come of age.

Mariah’s lively first-person voice keeps the narrative upbeat, while she and Henry rise above victimhood with their wry observations, keen insights and flashes of humor. Serving up lots of vivid local color, Still Life takes readers to Dupont Circle on a Friday night, the open-air market in Adams Morgan, a walk along the C&O Canal. Here we meet The Washington Post’s art critic, among other denizens of the art scene, as well as highly placed Log Cabin Republicans working in the White House.

Still Life with Aftershocks was a semi-finalist in the 2012 Amazon Breakthrough Novel Award contest and received special mention in the 2012 Washington Writer’s Publishing House contest. 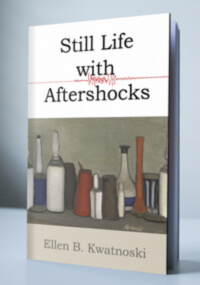