Baseball season comes as a whiff of freshly cut grass every year, but especially this year, after the long, hard winter of 2013. The beauty of it all—the brilliant green field and terracotta diamond; the players’ breathtaking choreography as they catch bare-handed, pirouette and throw; the batters fanning the air; the Kabuki-masked catcher in his crouch; the pitcher strutting to the mound. I could go on and on…and I haven’t even mentioned the beer.

But I’ll spare you more hyperbole. What I will tell you is that here in the nation’s capital, there is a surprising amount of art devoted to the sport, most of it cached in the National Portrait Gallery’s third floor “Champions” collection.

The Georgia Peach, “Ty Cobb,” oil on canvas, by Joseph F. Kernan, 1916, played in the majors for twenty-four years. A powerful, accurate hitter and fleet base runner, he perfected the “hook slide” and set a life-time record of 892 stolen bases, which held for 50 years. His lifetime batting average of .367 was never equaled and in 1936, Cobb was the first player to be voted into the Baseball Hall of Fame.

Next up, “Roger Maris,” egg tempera on board, by Robert Vickrey, 1961. What a swing! And what determination in the set of his jaw. Maris was acquired by the Yankees in a 1960 trade in and promptly hit two home runs, a double, and a single, driving in four runs in his very first game. By 1961 he was in a “home run derby” with his teammate Mickey Mantle, both in the running to beat the Babe’s single season record of 60 homers. Maris hit number 61 on the last day of the season.

Here is the “unorthodox catapult style” of San Francisco Giants “Juan Marichal,” acrylic on canvas, by Gerald Gooch, 1966, in all its windmill glory. Marichal pitched a one-hit shut-out against the Phillies to end the 1960 season with a total of 191 wins and was the first Latin American to be inducted into the Baseball hall of fame “via the regular selection process.”

One of the greatest all-time managers, “Casey Stengel,” polychromed bronze, by Rhoda Sherbell, 1981, led the New York Yankees to ten American League pennants and seven World Series Championships in twelve seasons (1949 – 1960). When he took on the New York Mets, he declared, despite their hapless performance, “the Mets are gonna be amazing!” I love this weary-eyed, long suffering Stengel, with his noble earlobes and meticulously detailed uniform.

You can almost hear the crack of the bat in “Reggie Jackson,” tempera on board, by Howard Rogers, 1974. The mighty swing of this Oakland A’s hitter–nicknamed “Mr. October,” for hitting three consecutive homers in the clinching game of the 1977 world series–drove in 563 career home runs. Known for his theatrical, out-sized personality, Jackson played in seven World Series.

“Carleton Fiske,” oil on cotton duck, by Susan Miller-Havens, 1993, looms out of the black background, in his eyes a certain desperation. It’s clear this man plays on the edge. “You don’t play baseball,” Fiske said, “you work at it.” Fiske played 24 seasons in the American League (for Boston and the White Sox) and was one of the top hitting catchers of all time. In 1975, despite recent knee surgery and a broken arm, he blasted a twelfth inning home run to win the sixth game of the series (playing for Chicago).

Look at the eyes in “Nolan Ryan,” oil on canvas, by Ruth Munson, 1994. You can feel that 100 mile-an-hour fastball coming at you—or maybe it’s one of his killer curve balls. Check out the hand—like a ballet dancer’s port de bras. Ryan played 27 years in the majors, in both leagues. He was drafted by the Mets and helped them win their first World Series in 1969. After being traded to the Angels, he pitched four no-hitters from 1973-1975. At his retirement in 1993, he held the all-time career strike-out record of 5,714.

In “Yogi Berra,” bronze, 1973, another wonderful sculpture by Rhoda Sherbell, the artist has caught this self-effacing charmer in a characteristic moment. With his furrowed brow and knowing eyes, you can almost hear him saying, “It’s too crowded. Nobody goes there anymore,”or another of his many “Yogi-isms.” In his eighteen seasons (1946 – 1963), Berra was described as a catcher who “stopped everything behind the plate and hit everything in front of it.”

Before we leave the National Portrait Gallery, we’ll stop on the first floor and see the newly acquired portrait of baseball great, Hank Aaron. This arresting portrait by Ross Rossin, oil on canvas, 2010, greets you like an old friend as you enter the museum. The Atlanta Braves home run king was on hand at the museum to unveil the picture, as well as to celebrate his 80th birthday in February of this year. He stayed to meet with admirers and recorded this delightful accounting of memories of his father and childhood. https://www.youtube.com/watch?v=cC4JwAz1Im4

Next, we make our way across town to the Phillips Collection, where we find one of my favorite baseball paintings, Marjorie Phillips’ “Night Baseball,” depicting a 1951 game between the Washington Senators and the New York Yankees. Wife of Duncan Phillips, founder of this preeminent modern art museum, Marjorie became a devoted Senators fan and often sketched in the family’s box seats just behind the dugout on the first base line in Washington DC’s old Griffiths stadium. Joe DiMaggio, with his characteristic wide-legged stance, can be seen in the outfield playing in his last season.

Nearby hangs, “World Series,” by Arnold Friedman, oil on canvas, undated, acquired in 1938. This genteel vision of the sport reminds us, sadly, that we don’t see enough straw boaters these days. Maybe we can bring them back to replace backwards baseball caps. Well, sigh, maybe not.

Both works are part of the blockbuster show, “Made in America,” now on view at the Phillips Collection and previously reviewed in this space. http://ellenkwatnoski.com/made-in-america-american-masters-from-the-phillips-collection-1850-1970/ 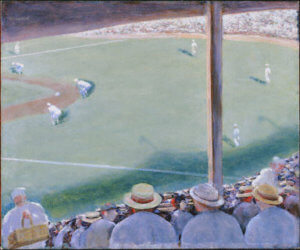 Ah, baseball. With each new season, new hope. See you at the game!

[Full disclosure: no, I don’t have all these stats memorized. Hardly. I gleaned them from the excellent accompanying notes in the National Portrait Gallery. “Champions” is a permanent collection and  features other sports art, including the lovely portrait of Arthur Ashe, by Richmond VA artist,  Louis Briel.]