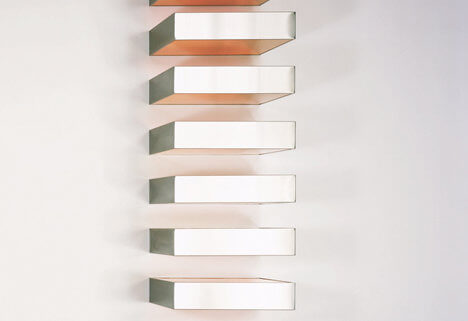 It’s not all stockyards and cowboys in Fort Worth.

It’s also Matisse and Picasso, Caravaggio and Monet, and Mondrian and Motherwell.

The Kimbell Art Museum grew from the Kimbell Art Foundation, founded by Kay and Velma Kimbell and their family in the 1930s.  In 1964, after Mr. Kimbell’s death, the family left the collection (and a substantial personal fortune) to the Foundation to establish a public art museum “of the first class” in Fort Worth. The aim of the museum was to showcase quality works from all eras—“any and all periods in man’s history, and in any medium or style.”

The small collection (about 350 works of art) is housed in a vaulted building designed by Louis Kahn which opened to the public in 1972. Yes, that Louis Kahn, the brilliant mid-century architect whose double life was exposed and tenderly explored by his son, Nathaniel, in the gripping 2002 documentary, “My Architect.” The building itself is a treasure, beautifully detailed and giving a sense of the sacred. Kahn said that here “light is the theme.” Natural light comes through skylights along the top of the barrel vaults and warms the travertine marble walls and beautifully lights the paintings that hang on them. Construction is underway for a newly expanded space by renowned architect Renzo Piano.

After walking up the perfectly proportioned staircase from the lobby you are met by two gallery spaces. The permanent collection, which we’ll explore today—is on the left. Upon entering, you’re greeted by Matisse’s “L’Asie,” 1946. Accompanying the lush painting is this revealing quote: “I have always tried to hide my own effort and wanted my work to have the lightness and joyousness of a springtime which never lets anyone suspect the labors it has cost.” Good advice for any art form. As I labor over still more revisions to my novel, I hope my characters, their surroundings, and their observations on  life are as fresh and seemingly unworked as this lovely young woman’s image.

Bartolome Esteban Murillo’s 1655 genre painting, “Four Figures on a Step,” grabs the viewer with the immediacy of a contemporary photo-realist work. You do a double-take. Is the woman wearing glasses Susan Sontag? Did they even have glasses in 1655? What’s up with the child and his bare bottom? What’s going on here? Apparently, quite a bit. Procuresses were commonly shown as a bespectacled, calculating business woman in Spanish art and literature of the day. The lifting of the veil is a common come-hither gesture and the frank lasciviousness of the boy on the left makes the viewer feel he’s enjoying our discomfiture. Realization dawns and you step back. That poor child! Still, the painting fascinates as does a Wee Gee photograph. You feel you’ve had an authentic, if appalling, glimpse of the underbelly of real life more than three hundred fifty years ago. 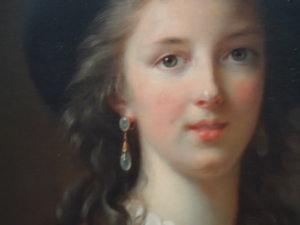 By comparison, Elisabeth Louise Vigee Le Brun’s 1781 “Self Portrait” is as refreshing as a palate-cleansing sorbet. You bask in her creamy skin, clear eyes, glossy hair and chic hat. Not to mention those gorgeous earrings. She has the confidence and directness befitting her status as a successful 27-year-old painter of nobility, including Marie Antoinette.

A short walk across the street will take you to “the Modern,” an equally stunning building designed by the Japanese architect, Tadeo Ando. Opened in 2002, with its floating glass pavilions, the Modern is a graceful companion to the venerable Kimbell. Chartered in 1892 as the Fort Worth Public Library and Art Gallery, the Modern is the oldest museum in Texas, and one of the oldest in the United States. 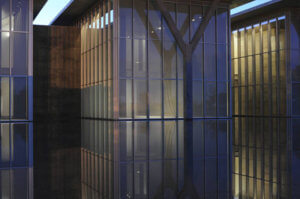 Museum of Modern Art, Fort Worth

Having recently visited Donald Judd’s Chinati Foundation in Marfa, TX, the Modern gave us another helping of the artists’ work we’d enjoyed there. Here’s the Donald himself in: “Untitled,” 1967, a stainless and orangey-pink Plexiglas creation. The ten units are hung equidistant from each other from floor to ceiling. The plexi glows against the white wall of the gallery, giving mysterious energy and presence to the simple totemic arrangement. Judd’s aim was to create “specific objects” that exist in harmony with their surroundings, rather than sculptures made to be seen in virtually any setting. 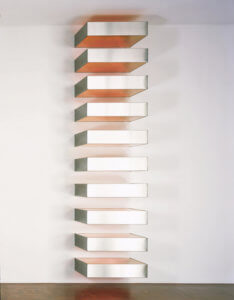 Judd’s long-time collaborator, Dan Flavin, also rejected the notion that he was a minimalist or a sculptor. He’s been compared to Marcel Duchamp for his delight in using off-the-shelf-objects and placing them in such a way, as does Judd, that their settings inevitably become a part of the work. “Diagonal of May 25, 1963,” 1963 exemplifies this principal perfectly.

The wall panel accompanying Carl Andre’s “Tau and Threshold (Elements Series),” 1971 tells us that he was inspired by Brancusi’s 1918 “Endless Column.” Frankly, for this viewer, it’s a bit of a stretch to see the connection. In Andre’s work, blocks of western red cedar are placed, much as a child would do with toy blocks, to form this piece. Resisting the temptation to think “my kid could do that,” I looked up a more extensive analysis of this work on the Modern’s website. Michael Auping tells us, “Andre devised the Element Series in the early 1960s with the suggestion that the same identical units could be used to create different configurations endlessly. . . .Tau and Threshold addresses the architectonic and figurative possibilities of sculptural form in a radically fundamental way.” Another definition of child’s play? Maybe… 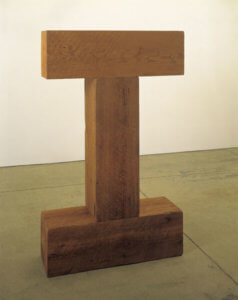 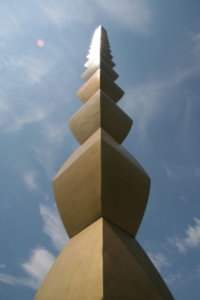 After taking in the art, we repair to the lovely café for lunch. Outside on the deck, you float over the shallow pool filled with round rocks and feel a part of the art. And also pleasantly full, both of art and curried chicken salad. The perfect combination: good food and engrossing art.

What’s for dessert? The gift shop, of course!

The Modern’s website is an excellent resource for researching artists:

For information on the Kimbell go to: https://www.kimbellart.org/architecture/kahn-building 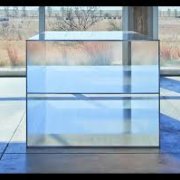 Road Trip! Minimalism to the Max in Marfa, TX
2 replies