Strolling through Savannah’s many Spanish moss-festooned squares, I was transported to a by-gone era—the graceful houses, ornate balconies, magnolia-scented breezes, a horse’s hoof ringing on cobblestones—until I came to Telfair Square, that is. Here, I spotted a bleached white modernist structure that, rather than looking out of place, was refreshingly inviting, with its clean lines and glass walls.

Stepping into the vast atrium of the Moshe Safdie-designed Jepson Center for the Arts, I imagined the tug of war that must have taken place between Savannah’s old guard and those lobbying for this building (completed in 2006). But this is Savannah, not Charleston, after all. This historic city is home to the Savannah College of Art and Design which has repurposed many old and beautiful buildings, and has opened this city to new ideas and the forces of change. 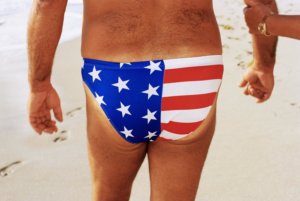 Just not too much change, thank you very much.

Once I’d paid the modest entrance fee, I visited the charming Bird Girl, the familiar image from the cover of John Berendt’s wildly popular book, Midnight in the Garden of Good and Evil. Bird Girl has left her wistful home in the cemetery to live here on the second floor, demurely greeting visitors in the children’s section. 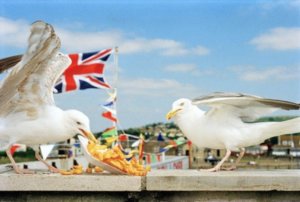 Next, I headed for the beach.

I had been only vaguely aware of Martin Parr before seeing this exhibit, though he’d made the international photography scene in 1986 with his book, The Last Resort, featuring photographs made at New Brighton, near Liverpool. “The ability for us to laugh at ourselves,” Parr says, “is Britain’s saving grace.” Now, with “Life’s a Beach,” the whole world is laughing. Surreal, openly mocking of our human vanities, and slyly satirical—this show of photographs taken at beaches around the world, gives us the widest lens possible on human seaside behavior—the good, the bad, the ugly, the endearing, and the outrageous. 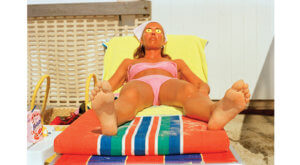 Flag images figure prominently in many of Parr’s photographs—national identity given a twist. In Miami, in 1998, old glory waves again. And in Westbay, UK, seagulls fight over “chips” with the Union Jack in the background, 1997. 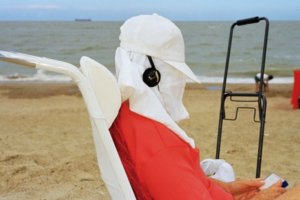 I love the matter-of-factness of Parr’s eye, how he stares down the absurd and delivers it deadpan. Several of these images had me laughing out loud. In Knokke, Belgium in 2001, the woman’s eye guards give her a startling eye popping stare, as if hurled onto her chaise by a cartoon knock-out punch. 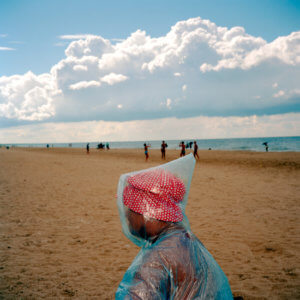 Also in Knokke, Belgium in the same year, this ghostly apparition appears to be from another planetary system entirely. While in Jurmala, Latvia, 1999, we meet another extraterrestrial.

The young girl with a rainbow in the background (also taken at the same time in Latvia), shows Parr’s ability to find moments of sweetness in life’s parade of the absurd. I love her cocked elbow, her look of bold confidence. I hope she held onto that quality in later years. 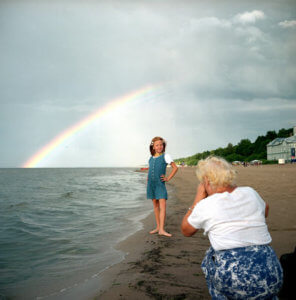 In a mysterious image, taken in Qindao, China, 2010, the groom appears to float away on a rising wave, so taken with his bride he levitates, as might a swain in a Marc Chagall painting.

Coming back to earth with a smack, we meet a woman at Paington, UK (1992), lurking behind her Sun tabloid, avidly reading, presumably, the article entitled “I Want to Hang Them.”

After seeing this show, I marveled at Parr’s ability to see the world from his own peculiarly rakish angle and make his art look easy. But, as we all know, especially now, with each of us toting our own smart phone camera and documenting our every move, “Photography is the simplest thing in the world, but it is incredibly complicated to make it really work.” So says Martin Parr. I have to agree. 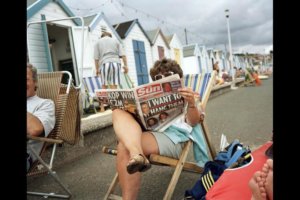 I saw the world differently after walking out of this show, and after all, isn’t that why we love what artists do? If you’ve been hooked by these images as I was, you can own Life’s a Beach, a miniature version of this show sold by book purveyors everywhere. (About $20.00 on Amazon.)