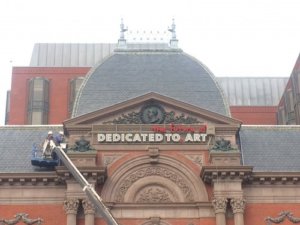 I’ve been wondering about the newly reopened Renwick Gallery here in Washington, DC. Long a cherished space, I was eager to see what the two year-long renovation of this Smithsonian museum—heretofore devoted to craft and decorative arts—had wrought. The first thing that jarred me was the bold white plastic sign along the exterior fence that announces “RENWICK” in giant sans-serif letters. In search of a photo, I came upon a number of articles that decried the placing of a garish LED sign on the front of the building, replacing the 1880s legend carved into the façade’s brownstone: “DEDICATED TO ART.” The new sign reads “DEDICATED TO THE FUTURE OF ART.” Museum officials say the sign is only temporary, part of the opening celebration. We can only hope. I’m also hoping the white plastic sign along the fence is temporary, but fear it’s not. The same logotype appears throughout the museum’s website and printed materials, no doubt in an attempt to shake off the lovely old building’s staid image. Strike one. 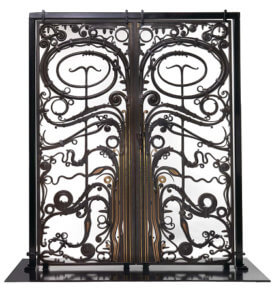 Strike two: the gorgeous 1974 Albert Paley portals are gone, replaced by anonymous brass doors that would be happy at a corporate headquarters or slick Neiman Marcus store. Could I somehow have missed the Paley gates? No…I found this image of the portals with the sad words, “No longer on view.”

Not a good start. Inside, the grand staircase is covered with a new red carpet that wends its way unevenly up to the second floor. This at least, is a stunning new addition, although the carpet has become noticeably soiled in the short time since the gallery’s opening earlier this month.

The interior of the graceful old building is painted shades of chilly gray causing the elaborate moldings, cornices, and flourishes to withdraw in the face of the “future” of art, that bracing, challenging, whup upside the head that is the new direction of the Renwick. 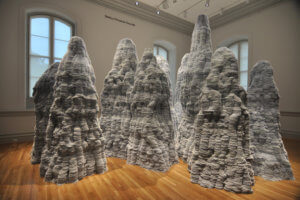 If the inaugural show—entitled “Wonder”—is an indication of what is to come—the future is overblown. “Wonder” gives us huge site-specific installations that occupy entire gallery spaces, an attempt at an ambitious foray into a new incarnation. As I walked through the galleries, though, I found myself longing for the delights of the permanent collection. 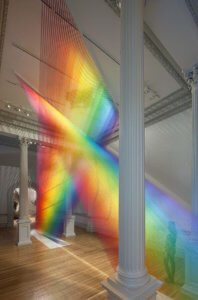 Tara Donovan’s “Untitled,” 2014, does have a spooky presence. Made of gazillions of styrene index cards, these sculptures appears to be about to lumber into motion, like a gaggle of Wookies waking up from a trance. I began to feel better.

The next gallery is inhabited by Gabriel Dawe’s “Plexus A1,” in which silken thread attached to a wooden base creates “fleeting rays of light” intended to evoke the Mexico City and East Texas skies of the artist’s youth. 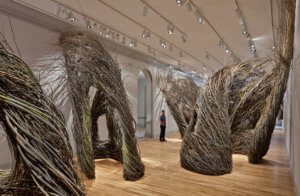 goers posing for pictures inside its winsome teepees of willow sticks. The piece, taking up the whole of the back gallery, looks as if a wind had blown through and deposited the structures. Like a swooping Maurice Sendak illustration, the forms whip and whirl and trail off into corners. Plus, they smell good—fresh and woodsy. I began to feel better still.

But all my nascent good feelings were dashed in the former grand salon where Janet Echelman’s “1.8,” looms over an artist-designed carpet on the floor. Made of knotted and braided fiber with programmable lighting and wind movement, the piece is based on a map of the energy released across the Pacific Ocean during the 2011 Japanese earthquake and tsunami. This event shifted the earth on its axis and shortened the day by 1.8 millionth of a second. Large pillows on the floor allowed viewers to recline beneath the changing sculpture. “1.8” is monumental in size, but not awe-inspiring. It troubled me to see a natural cataclysm in which so many lives were lost reduced to a pretty macramé abstraction. I missed the old salon-style space, truth to tell. 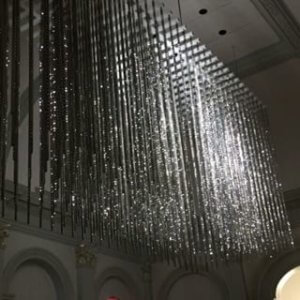 Leo Villareal’s “Volume” hangs over the grand staircase. Made of white LEDs, stainless steel, custom software, and electrical hardware, the shimmering, pulsing piece is set to sparkle in random patterns, never repeating a sequence. I enjoyed watching it, but was not as transported by it as I am by the same artist’s enveloping piece for the walkway between the East and West buildings of the National Gallery of Art. 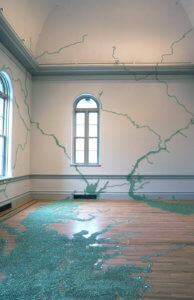 I adore Maya Lin’s work and had eagerly anticipated what she’d do for this show. “Folding the Chesapeake,” 2015, is made of industrial fiberglass balls glued to the floor and up the walls of the gallery space. The artist’s intent was “sharpening our focus on the need for conservation,” which I found a bit of a stretch. Still, this piece is lighter, more fluid, and while conceptual at base, more pleasing to the eye than many of the works created for this show. 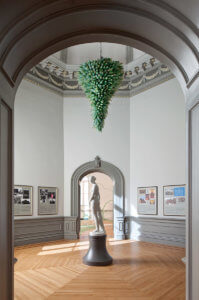 I enjoyed Dale Chihuly’s “Seafoam and Amber-Tipped Chandelier,” glass, 1994, hanging over the classical nude in the octagon room. In it, I felt some small ghost of the original Renwick had survived. But really, it’s hung too high. You practically miss it. 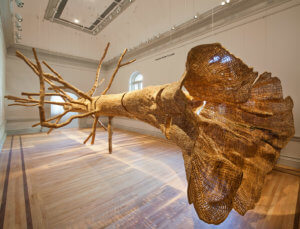 Two works—one made of recycled tires by Chakaia Booker and John Grade’s enormous tree—left me puzzled. The tires didn’t speak to me at all and Grade’s meticulously reproduced 150-year-old hemlock made me wonder (pun intended) why he’d gone to all the trouble. First he cast the tree, and then recreated it out of small pieces of “reclaimed old growth Western cedar,” using hours and hours of volunteer manpower in the process. The piece seemed an over-wrought attempt at duplicating a phenomenon of nature. It didn’t work for me in much the same way as Janet Echelman’s tidal wave fell flat. 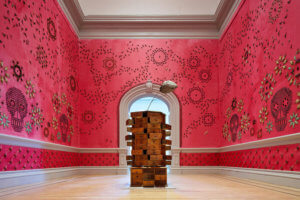 “In the Midnight Garden,” by Jennifer Angus is more than a little creepy. The artist has created stiff repeating floral wall patterns and day-of-the-dead skulls out of insects – yep, those are real bugs—and washed the walls with cochineal pink. In the center is an old chest of drawers, topped by a wasp’s nest and filled with curiosities: more bugs, buttons, feathers, tiny books, artificial fingernails. This Joseph Cornell-like piece smelled musty, like grandma’s attic, a pleasant, evocative scent that drew me in. I tried not to look too hard at the six-inch dead critters pinned to the walls. 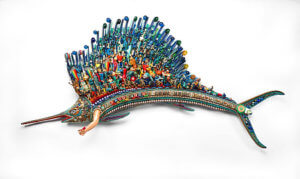 Not even the gift shop was welcoming. It’s been recast as a sleek jewel box of a space with a lot fewer books and a lot more artfully draped 300 dollar scarves. I’d been longing for the icon of the Renwick’s permanent collection, Larry Fuente’s “Game Fish,” and found it, mounted in the gift shop above a display of game fish magnets and other tchotchkes. That about sums it up, folks: Take what made the Renwick great and make a fridge magnet out of it.

Sigh. I guess I’m no longer wondering. I’m mightily disappointed in the “new” Renwick. The only consolation is that, once “Wonder” comes down on May 8, 2016, the permanent collection will come back.

A branch of the Smithsonian museum devoted to American craft, The Renwick Gallery near Lafayette Square in Washington, DC, with its cocoa stone and brick edifice and motto over the door—“Dedicated to Art”—is a treat no matter what’s going on inside it. Now a rare treat can be seen there: “Thomas Day: Master Craftsman and Free Man of Color.”

Thomas Day owned and operated a thriving furniture and architectural elements shop in Milton, NC, selling to wealthy plantation owners and other prominent patrons before the Civil War. This show features 36 pieces of meticulously made furniture

As you enter, you’re greeted by a charming hat stand (better known in 1857 as a “hall tree”) with wavy spokes radiating from its round mirror, like a precursor to the mid-twentieth century sunburst clock.

Turn to the left and you’ll see reproduced a document with the embellished signatures of the good citizens of Milton—a “Petition to the Assembly” of the State to allow Day’s wife, Aquilla Wilson Day, to move from Virginia to North Carolina to live with him. We learn that, after the slave rebellions in Virginia (1800) and South Carolina (1822)—among other harsh restrictions—free people of color could not move into the state, nor could they leave for more than 90 days. This chilling document, while it shows the willingness of the North Carolinians to bend the rules, represents more than a little enlightened self-interest. Day’s distinctive style (graceful lines and undulating forms) made his furniture desirable for many reasons, not the least of which that it could be had for half the cost of comparable pieces made in Philadelphia or New York.

After reading that petition you see the furniture through an altogether different lens, its reverberations following you throughout the show. How appalling the situation he was in, yet, how diplomatic, how much a master salesman, as well as the master craftsman, he must have been. We read further that he and his wife were welcomed into the Presbyterian Church for which he designed simple pine pews, a template for which is seen here. He sat, not with the slaves or free blacks, but with the white parishioners. More reverberations. What must he have felt? What a story!

Day’s style, influenced by the “Grecian” revival in design and architecture in the South during the 1800s, is characterized by classical pillars and scrolls. While he used John Hall’s Cabinet Makers’ Assistant, a bible of American style, he adapted Hall’s templates to make them his own.

As is so often the case, I’m most drawn to the simpler designs, among them an oval dining table (traditional style, 1855) in walnut and yellow pine. The table has four leaves with a fifth ingeniously stashed in a sort of sling under the table top.

An elegant sleigh bed (French style, 1855), made in 1840 of maple and yellow pine, is covered by a pieced and appliqued quilt by Molly Parsons Pratt. You can’t help but think about all the goings on in this bed—births, deaths, the gamut—as you look at the gently curved footboard and imagine all the generations who woke to this enfolding shape.

The outstanding piece of this show is a walnut and yellow pine blanket chest in the “neat and plain” style, 1845-50. Mixing German-American construction techniques, dovetail joints are reinforced at the top corners with a pin. Curvy cutouts and spurs frame the negative space at the feet.

A graceful lounge in the Grecian style, 1844-45 (walnut and yellow pine)—inspired by the designs of Englishmen, the two Georges Sheraton and Smith—has a straight back and “ogee curves,” a wonderful new name for an “S” curve.

Among the dressers, my favorite is an open-pillar bureau, Grecian style, made in 1855 of mahogany, yellow pine and poplar. It’s very simple but for the mirror attachments which, when framing your reflected face, look for all the world like the split tails of the Starbuck’s logo mermaid.

A charming crib (walnut and yellow pine, 1848) in the Windsor style is topped by a pinwheel quilt cut and pieced in 1840 and completed in 1849 by Caroline Miller. After nine years in the making, I’m glad Caroline got the credit. Next to the crib is an adorable child’s commode.

Rockers, a pair of sweet French style side chairs, an imposing and dignified sideboard, lovely side tables, more dressers and lounges—all are in superb condition and glow as if shining a light into the dark past.

Thomas Day: Master Craftsman and Free Man of Color will be on view until July 28, 2013.