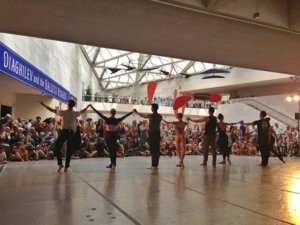 As an accompaniment to this fabulous show at the National Gallery of Art in Washington, DC, students from the Kirov Academy of Ballet of Washington, DC performed excerpts from L’apres-midi d’un Faune (Afternoon of a Faun) and The Firebird on July 13, 2013 in two standing-room-only performances on the mezzanine just outside of the gallery where show is mounted.

The performance was introduced by Martin Fredmann, artistic director of the Kirov Academy who was justifiably proud of the young dancers. Offering a high school diploma in addition to dance studies, the Academy places an astonishing 75 percent of its graduates in major dance companies around the world. After this performance, it’s easy to see why. 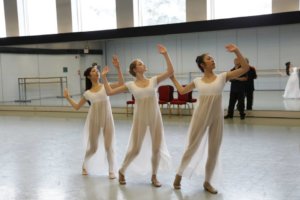 Fredmann told the audience that Claude Debussy, in creating music for L’apres-midi d’un Faune, was inspired by the French symbolist poet, Stefan Mallarme’s poem of the same name, while Nijinsky took the naturalistic choreography of Michel Fokine in a new direction, devising “archaic” movements recalling the stylized front-facing figures on ancient amphorae. Fredmann invited the audience, lacking a curtain, to close their eyes and “await the magic.” As the music began, there was young Emerson Moose atop a large rock apparently sunning himself until the gauzily-clad nymphs appear. A beguiling Faune dressed in skin-colored leotard and tights, Moose was a lithe sprite to the nymphs’ more reserved progress across the stage. Bailey Anglin, as the lead nymph, carried a raspberry scarf as enticement to the Faune. Once the nymphs have vanished and our Faune is left only with the scarf, he mounted his rock with deliberate steps, lay face-down upon it, and turned to extend one leg in an insouciant way, as if to say, look at my beautiful leg. I alone am enough!

During the interval between performances, Fredmann talked about Natalia Gonchorova’s complete redesign of the Firebird set (see my earlier blog post http://ellenkwatnoski.com/2013/07/07/lush-life-part-ii-when-art-danced-with-music-diaghilev-and-the-ballets-russes-1909-1929/) with the vast onion-dome backcloth and brilliant costumes. Her version was the standard until Marc Chagall did new sets for a 1949 performance with Maria Tallchief as Firebird. Based upon a Russian folk-tale, The Firebird tells the tale of a prince who climbs a wall and finds an enchanted garden owned by an evil wizard. Golden apples hang from the trees, but they pale in comparison to a half-woman, half-bird creature—the magical Firebird he sees there. Dashing Prince Ivan, again danced beautifully by Emerson Moose, spies the exquisite Firebird and hides behind a tree to watch her flit and preen and enjoy being a fiery bird-girl. But, alas, watching is not enough and he must capture the bird, danced by fifteen-year-old Riho Sakamoto. With costumes worthy of Leon Bakst, these lovely dancers made the old folktale come to life without sets, lights, or onion domes. Sakamoto is an astonishingly mature dancer, delicate yet strong, with her bird-like head movements, gorgeous extensions and beautiful line. Her struggle with the Prince was complex dramatically—one had the sense she enjoyed being caught, even as she fights against capture. Perhaps this notion is confirmed when she plucks an enchanted feather from her plumage and bestows it upon the dazzled Prince. Sakamoto and Moose enjoyed a standing ovation from the appreciative audience, both on the mezzanine and literally hanging from the stairwells. Balletomanes: remember those names: Riho Sakamoto and Emerson Moose! 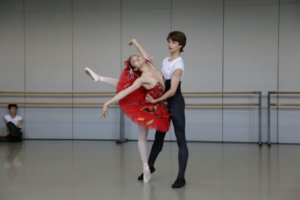 If you come to the August 11, 2013 performance by Dana Tae Soon Burgess you’ll see original choreography premiered in a suite of dances “inspired by the spirit of the Ballets Russes.” Come early! There will be two performances at 1:30 and 3:30, best seen from the front rows or standing in the back of the performance space. The riser is low enough to provide a limited line of sight much further back than the third or fourth row.

On view until October 6, 2013, the exhibition is well worth seeing, with or without a dance performance accompanying it. Bravo to the National Gallery, the Victoria & Albert Museum (owners of the costume collection), and now, the Kirov Academy of Ballet of Washington, DC. https://kirovacademydc.org/

If you’re anything like me, seeing this fabulous show will take you at least two visits. It’s huge, covering two floors of the East Building of the National Gallery in Washington, DC. Devoted to the merging of art, choreography, dance, and original music that became the first modern ballet company: Serge Diaghilev’s Ballets Russes, this exhibition showcases more than 130 costumes, set designs, films, paintings, costume designs, posters, and other charming ephemera, including the earrings worn by Nijinsky in Scheherazade.

Diaghilev, with his peculiar brand of entrepreneurialism and artistic vision, comes fully alive here. We learn from the beautiful exhibition companion book, that in 1905, at 33, Diaghilev organized an exhibition of Russian historical portraits in the capital, St Petersburg. The tsar himself, Nicolas II, personally opened the display and enjoyed seeing his Romanov ancestors among the paintings Diaghilev secured by visiting great houses and cajoling the owners to lend them for the show. Diaghilev expected to be named minister of culture, at the very least, but events conspired against him, and after 1906 his entire career took place outside of Russia.

Yet Russia, its exoticism, spirit, and folktales are present everywhere here – if Diaghilev couldn’t celebrate his homeland in his homeland, he made it glitteringly accessible to Europe and beyond. At the opening of this show, we see a spectacular robe from the coronation scene of Boris Godunov (1908), a bell-shaped garment embroidered with silk and metal thread, glass beads, in what appears to be a pomegranate pattern, its orientalism setting the tone for what’s to come.

The exhibition is organized by ballet–Prince Igor, Les Sylphides, Petrushka, and Scherazade among them–each having its own section. The only known footage of a 1928 Diaghilev rehearsal of Les Sylphides plays next to the costumes and miniature set designed by Alexandre Benois. One of the innovations that Diaghilev and his collaborators brought to dance was liberating the torso from stiff stays to allow a more fluid line. Brilliant silks, flowing trousers, and Turkish-inspired tunics abound. You’d be stunning at any black tie affair decked out in one of Prince Igor’s Ikat coats. Charming pencil sketches by Valentine Hugo (1911) show Nijinsky in the title role of Petrushka while screening on a wall we see a performance of the same ballet by the Joffrey Company (1981).

Be warned: The costume sketches by Leon Bakst will cause lightheadedness, lust, and the desire to rip them from the walls. In fact, to call them “sketches” hardly does them justice. Dramatically posed, beautifully drawn and accented with vivid color and metallic paint, they’re works of art in themselves. We see the 1910 costume for the chief eunuch from Scherazade – he wears raspberry silk with paisley applique, a plumed turban and wonderfully striped trousers. An official-looking bunch of keys hangs from his belt. Bad news: you’re a eunuch. Good news: the clothes are great.

How can you not fall in love with Bakst’s Odalisque (1911)? She flips an orange scarf with abandon, wearing a see-through top, one shoe off, in transparent “harem” pants. Bakst traveled widely—to Greece, North Africa—and brought back ideas for costumes.

The Little God costume from “The Blue God”

Some little-known ballets are showcased here as well: The Blue God, a Fokine mash-up of Hindu and Buddhist images, was performed only six times. The “little god” costume with headdress of stacked heads, is particularly charming. Another gorgeous Bakst sketch for a Temple Dancer, Young Raja, and Pilgrim from The Blue God left me craving the shoes, pale green with turned up toes. A mannequin leaps, wearing a costume covered with rose petals from the The Rose. Nearby, we see a beguiling photograph of Nijinsky wearing the costume, as the Spirit of the Rose.

One of the many joys of this show are the paintings—Modigliani’s portrait of Leon Bakst (1917), with a blond moustache and twinkly blue eyes to match his scarf; a 1910 Jacques Emile Blanche painting of a costumed Nijinsky for The Oriental; and “Exit the Ballets Russes,” a 1914 cubist work by Fernand Leger.

A guaranteed swoon is the sloe-eyed Faun, Rudolph Nureyev, from the 1967 Joffrey Ballet performance of Afternoon of the Faun. Just under the screen are arrayed three of the nymph costumes you see the dancers wearing as they approach the pied

Costume, by Leon Bakst for Afternoon of the Faun

Faun. If you find yourself wishing you could watch the whole ballet enfold, you can content yourself with Bakst’s seductive sketch, featured as the signature image of the show.

The strident, insistent notes of Stravinsky’s Rite of Spring, along with the film of the Joffrey Ballet’s 1987 performance, strikes you: how extraordinarily avant-garde this work of art was in 1913. Chilling and brutally beautiful, one can see how much this work must have influenced modern dancers to come—Martha Graham and Erick Hawkins particularly. The costumes (by Nicolas

Roerich) are displayed in a circle in the middle of the room. Painted silk and felted wool, you have to wonder how the dancers fared under the bright stage lights.

Perhaps the most poignant moment of the show’s first floor is coming upon a small crayon and pencil work, entitled “A Mask,” done by Vaslav Nijinsky after succumbing to schizophrenia. One of many similar works he did from 1918-1919 while being treated in a sanitarium, it conveys the feeling that the person behind the mask is imprisoned. Nijinsky never danced again.

The show, in the National Gallery’s East Building, will be seen until September 2, 2013