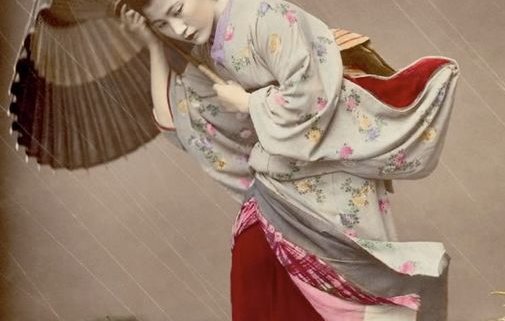 Before there was Photoshop . . . yes, you could manipulate photography in many fascinating ways, as the show, “Faking It: Manipulated Photography Before Photoshop” at the National Gallery of Art in Washington, DC, so brilliantly shows.

“‘Woman with Umbrella in the Rain,” by Kusakabe Kimbei

You begin your mystery tour with charming tinted daguerreotypes, photomontages of Civil War generals which include the ones who showed up late for the photo shoot, and a series of landscapes in which a sky roiling with clouds is superimposed over the blank whiteness that a camera’s exposure created back in the day. A charming chromolithograph from the 1870s shows a Japanese woman, bent against the wind, her parasol shielding her from the slanting rain, like the Japanese woodcuts that inspired Van Gogh’s “Bridge in Rain after Hiroshige.” Kusakabe Kimbei scratched the “rain” on the negative, the greenery in the foreground is a studio prop, and the flaps of the kimono are held up by wires so they appear to be flying in the wind. Edward Steichen’s “The Pond at Moonrise,” 1904, may not even have been shot in real moonlight, but rather “mock moonlight” created by underexposure or blue tinting. Still – it’s lovely, like the glazes and motifs on Rookwood pottery.

Things really get interesting in the gallery devoted to the Surrealist Movement, started in 1924 in Paris. Herbert Bayer created “The Lonely Metropolitan,”1932, in which disembodied hands, embellished with eyes, float mysteriously before a city scape. Eyes were a big thing, literally, with these photographers; in Maurice Tabard’s “Room with Eye,” the eye covers one wall, looking serenely at the radiator across the room. A famous image, “Cat + 1, made in 1932, shows Wanda Wulz’s face superimposed on that of the family cat. In “The Masks Grow to Us,” (1947), Clarence John Laughlin, an aspiring writer, photographed a young woman with a partial mask affixed to her face. The effect, as

“Dream Number One: Electrical Appliance for the Home,” by Grete Stern

the artist would want us to see, is that “the girl herself has grown harder and more superficial.” Bauhaus-trained Grete Stern made fabulist images to illustrate a 1948 series on “how psychoanalysis will help you” for a popular Argentinian magazine aimed at working class readers. Each photograph illustrated a dream, often sent in by readers. In “Dream #1,” a woman with upraised arms is the base of a lamp, a man’s huge hand at her feet is about to flip the switch to turn the lamp on. Hmmmmm. Well, sometimes a lamp is just a lamp. Angus McBean’s 1949 “Christmas Card” shows the artist himself, a sly bearded imp, photographing a giant nude torso, a la Giorgio di Chirico.

The “Novelties and Amusements” gallery is full of some of my favorite fakery: A dirigible moored to the Empire State Building; “Tell Tale” postcards showing enormous ears of corn on flatbed train cars, giant fish swallowing helpless men, and huge light bulbs, captioned, “Does the Camera Lie?” Ghosts walk through walls in stereoscopes mounted in the center of the room. My favorite: “The Partial Dematerialization of the Medium Marguerite Beuttinger,” 1920, by an unknown photographer.

Things turn grimmer in “Politics and Persuasion,” where the manipulation of photography is a powerful propaganda tool for Stalin and Frank Galton’s composite portraiture chillingly supports the theory of eugenics. Weegee’s (Arthur Felig), “Draft Johnson,” 1968, shows Lyndon Johnson’s nose growing to Pinocchio proportion. Barbara Morgan’s unsettling “Hearst over the People,” 1939, is a giant William Randolph Hearst-faced octopus floating over a crowd. We also see Chairman Mao’s retouched and idealized portrait from 1964, and a group portrait of Hitler and friends in which Goebbels has been edited out of the picture to quell rumors that he’d been having an affair with the film maker, Leni Riefenstahl.

“Protoshop,” the last gallery, features a 1967 Richard Avedon creation – Audrey Hepburn’s lovely face atop absurdly elongated necks, five of them, make a fetching many-headed hydra. Edward Blumenthal’s “The Doe Eye,” 1950, graced the cover of Vogue Magazine and Jerry Uelsmann’s 1969 tree, roots and all, is suspended over an island, its reflection an abstract blimp worthy of the surrealists. Martha Rosler’s 1967 “Red Stripe Kitchen” strikes the viewer as a perfectly normal ‘60s-era kitchen, until you realize the figures bending before the red stripe are not painters, but American soldiers plucked from the battlefield in Vietnam.