All magical, to be sure, but the most compelling attraction on a recent visit to Venice was the Peggy Guggenheim Collection, housed in her unfinished palazzo overlooking the Grand Canal.

Walking through the gates made by American artist, Claire Falkenstein in 1961, we felt we were entering Peggy’s realm, her sanctuary, the place where so much creative collaboration—and so many shenanigans—took place. The story of the collection is really that of Guggenheim herself. Born in 1898 in New York City, she, although heir to her family’s considerable fortune, was attracted to the world of art and ideas early on.  In 1922 she married Dada artist Lawrence Vail, who became the father of her two children, Sinbad and the naïve painter, Pegeen. The two had arrived in Paris where she was to meet and befriend Constantin Brancusi, Marcel Duchamp and other art luminaries. By 1937 she had opened a gallery in London devoted to showing contemporary art. Two years later, she tired of the gallery and determined to open a museum devoted to modern art. She went on a collecting spree, vowing to buy a picture a day, despite the encroaching war. The work she acquired in those years formed the basis of the collection we see today. 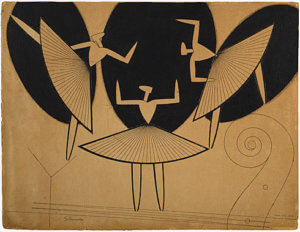 Her personal life was tumultuous: when asked how many husbands she’d had, she famously said, “Mine or other people’s?” More about Peggy: http://www.guggenheim-venice.it/inglese/museum/peggy.html.

Once through the front doors, we were greeted by Alexander Calder’s 1941 “Arc of Petals” hovering in the entry way like an old friend. The villa (unfinished only in the sense that a second floor was never added) is filled with light and gorgeous terrazzo floors. As you walk from room to room, feasting on the art, peeking out the windows for a glimpse of the busy canal, you can’t help but yearn to conjure Peggy for an intimate conversation about each piece. Failing that, including more of her furniture would have been nice, the better to picture her life here.

Arranged chronologically, the collection (which, unlike other notable collections, is intact and will never be moved from this location) reveals a collector of prescient vision and unerring taste.

Man Ray’s “Silhouette,” 1916, shows a flattened image of a vaudeville dancer in various poses with her feet on the strings of a violin, as if accompanying herself. Having begun to experiment with photography, Man Ray sought to illustrate several movements of the dancer at once, while eschewing his earlier “Romantic-Expressionist-Cubist” style in favor of one in which reality is distilled into surface pattern.

Wassily Kandinsky’s “Empor (Upward),” 1929, gives us another flattened image, with its own whimsical personality. Suggestive of tribal art, the creature looks back at us with its one eye, while appearing to smoke a red cigarette.

Throughout Guggenheim’s collecting career, she favored both the abstractionists and surrealists and tried to balance her attention to both. A beguiling example of the surreal is Max Ernst’s “Le Facteur Cheval,”1932, paper and fabric with pencil, ink, and gouache on paper. The postman Ferdinand Chaval was a real-life hero to the surrealists, having built a “Palais Ideal” from materials scavenged along his postal route. Here Ernst, in the guise of his alter-ego, “Loplop, Superior of Birds,” celebrates the postman and his refusal to succumb to a numbingly routine job.

During a gallery talk by a charming Spanish art history student, we learned that Piet Mondrian discovered Jackson Pollock working as a carpenter in New York and convinced Peggy to buy and show his work. “Eyes in the Heat,” 1946, has all the frenetic energy and movement of his later, “drip” style canvasses.

At around this time, Peggy commissioned Alexander Calder to make her a silver bedhead replete with fishes, dragon flies, and water lilies—the “pond” even radiates concentric rings made by water bugs. Imagine waking up to this every day! 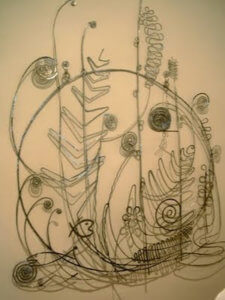 Once up, Peggy may well have donned earrings made by surrealist Yves Tanguy in 1938. Or perhaps ones made for her by Calder himself. It’s said that she wore one of the Tanguy earrings and one of the Calder earrings to the opening of her gallery to show her impartiality in the debate between the surrealists and the abstractionists.

I tend to come down on the side of the abstractionists and spent less time in the room devoted to the surrealists (although the floor, designed by Peggy, was a knockout). I fell in love with abstract expressionist William Baziotes’ “The Parachutists,” Duco enamel on canvas, 1944. In this sprightly well-worked-out composition, we see hints of Richard Diebenkorn’s future work in the rich colors, surface muddling, and the importance of the edges.

During the war years, Mark Rothko came to believe that painting that derived from myth or legend was a “proper response” to the horrors of the war, the holocaust, and the atom bomb. He said, “Only that subject matter is valid that is timeless and tragic.” In 1946, he created “Sacrifice,” watercolor, gouache, and India ink or paper. The central blood-like smear of reddish brown implies both mass and individual sacrifice; flames, targets and vaguely bomb-like shapes appear against gun-metal gray horizontal panels that foreshadow Rothko’s later work. 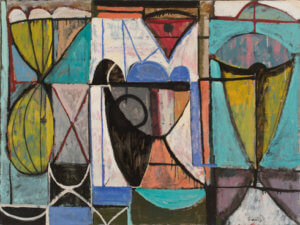 “The Parachutists,” 1944, by William Baziotes

A favorite surrealist painting from this collection, is “L’Empire des Lumieres,” 1953-54, by Rene Magritte. The painter’s goal was to depict “surprise” and “enchantment” and he succeeded admirably. The picture also conveys a sinister quality not unlike some of the work of Edward Hopper. The contrast between the darkened street and the blue sky gives the viewer a sense of discombobulation—is it day? Night? How can it be both? A lovely shiver-inducing piece.

There was more, of course, much more, including the lipstick red Calder stabile on the patio fronting the canal, tea in the café, and wandering the sculpture garden. How struck we were by the influence this one woman, the “mistress of modernism,” had on the course of art history.

Later, again sitting by the canal, we toasted Peggy Guggenheim with Campari Spritzers, and pictured her in her garden, surrounded by art, lifting her glass to us. 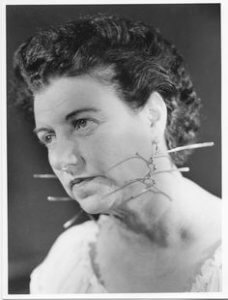 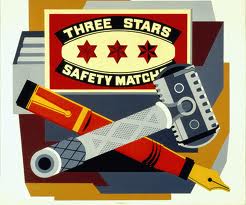 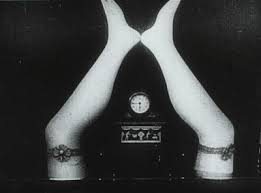 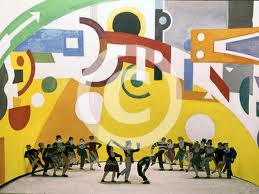 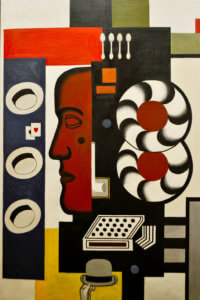