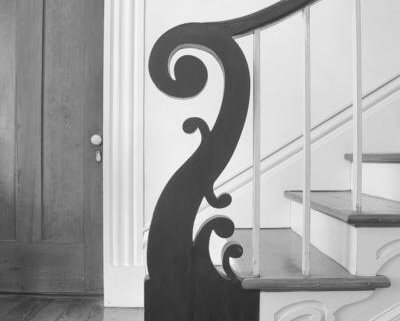 A branch of the Smithsonian museum devoted to American craft, The Renwick Gallery near Lafayette Square in Washington, DC, with its cocoa stone and brick edifice and motto over the door—“Dedicated to Art”—is a treat no matter what’s going on inside it. Now a rare treat can be seen there: “Thomas Day: Master Craftsman and Free Man of Color.”

Thomas Day owned and operated a thriving furniture and architectural elements shop in Milton, NC, selling to wealthy plantation owners and other prominent patrons before the Civil War. This show features 36 pieces of meticulously made furniture

As you enter, you’re greeted by a charming hat stand (better known in 1857 as a “hall tree”) with wavy spokes radiating from its round mirror, like a precursor to the mid-twentieth century sunburst clock.

Turn to the left and you’ll see reproduced a document with the embellished signatures of the good citizens of Milton—a “Petition to the Assembly” of the State to allow Day’s wife, Aquilla Wilson Day, to move from Virginia to North Carolina to live with him. We learn that, after the slave rebellions in Virginia (1800) and South Carolina (1822)—among other harsh restrictions—free people of color could not move into the state, nor could they leave for more than 90 days. This chilling document, while it shows the willingness of the North Carolinians to bend the rules, represents more than a little enlightened self-interest. Day’s distinctive style (graceful lines and undulating forms) made his furniture desirable for many reasons, not the least of which that it could be had for half the cost of comparable pieces made in Philadelphia or New York.

After reading that petition you see the furniture through an altogether different lens, its reverberations following you throughout the show. How appalling the situation he was in, yet, how diplomatic, how much a master salesman, as well as the master craftsman, he must have been. We read further that he and his wife were welcomed into the Presbyterian Church for which he designed simple pine pews, a template for which is seen here. He sat, not with the slaves or free blacks, but with the white parishioners. More reverberations. What must he have felt? What a story!

Day’s style, influenced by the “Grecian” revival in design and architecture in the South during the 1800s, is characterized by classical pillars and scrolls. While he used John Hall’s Cabinet Makers’ Assistant, a bible of American style, he adapted Hall’s templates to make them his own.

As is so often the case, I’m most drawn to the simpler designs, among them an oval dining table (traditional style, 1855) in walnut and yellow pine. The table has four leaves with a fifth ingeniously stashed in a sort of sling under the table top.

An elegant sleigh bed (French style, 1855), made in 1840 of maple and yellow pine, is covered by a pieced and appliqued quilt by Molly Parsons Pratt. You can’t help but think about all the goings on in this bed—births, deaths, the gamut—as you look at the gently curved footboard and imagine all the generations who woke to this enfolding shape.

The outstanding piece of this show is a walnut and yellow pine blanket chest in the “neat and plain” style, 1845-50. Mixing German-American construction techniques, dovetail joints are reinforced at the top corners with a pin. Curvy cutouts and spurs frame the negative space at the feet.

A graceful lounge in the Grecian style, 1844-45 (walnut and yellow pine)—inspired by the designs of Englishmen, the two Georges Sheraton and Smith—has a straight back and “ogee curves,” a wonderful new name for an “S” curve.

Among the dressers, my favorite is an open-pillar bureau, Grecian style, made in 1855 of mahogany, yellow pine and poplar. It’s very simple but for the mirror attachments which, when framing your reflected face, look for all the world like the split tails of the Starbuck’s logo mermaid.

A charming crib (walnut and yellow pine, 1848) in the Windsor style is topped by a pinwheel quilt cut and pieced in 1840 and completed in 1849 by Caroline Miller. After nine years in the making, I’m glad Caroline got the credit. Next to the crib is an adorable child’s commode.

Rockers, a pair of sweet French style side chairs, an imposing and dignified sideboard, lovely side tables, more dressers and lounges—all are in superb condition and glow as if shining a light into the dark past.

Thomas Day: Master Craftsman and Free Man of Color will be on view until July 28, 2013. 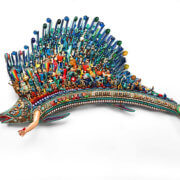 “Wonder” at the Renwick Gallery
2 replies