“Painting is about the world we live in. Black people live in the world. My choice is to include them. This is my way of saying yes to us.” –Kehinde Wiley. 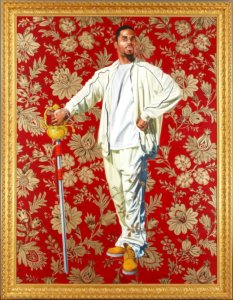 The Virginia Museum of Fine Arts in Richmond, VA, has mounted a 14-year retrospective of the prolific artist, Kehinde Wiley. The show, A New Republic, first organized by the Brooklyn Museum, is comprised of some sixty large-scale compositions in oil and enamel, stained glass, and gold leaf on wood. 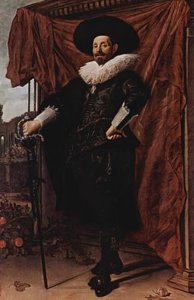 Born in Los Angeles in 1977, Wiley now lives and works in Brooklyn, NY, drawing many of the models for his portraits from the streets of Harlem and his own neighborhood. Wiley tweaks our conception of art, art history, power, and identity by placing his subjects into the compositions of old masters such as Peter Paul Rubens and Jacques-Louis David.

When you enter the show, you’re met with the eye-popping “Willem Van Heythuysen,” 2008. Riffing on the 1625 painting by Dutch master, Frans Hals, the artist gives us a new vision of a sword-bearing nobleman. Both men sport goatees, but our contemporary dandy wears snow-white athletic clothing instead of a stiff white ruff. Posed with the trappings of wealth and status of his day, Hals depicts the wealthy merchant in front of a luxurious tapestry, as does Wiley. The original van Heythuysen may have been a cloth merchant; clearly the tapestry is an important part of his world. Wiley poses the young man floating before deep red and gold brocade. The fronds of the floral motif begin to wrap themselves around the legs of the subject. Is there a double meaning here? Perhaps that the “backgrounds” of many of these young men threaten to ensnare them?

In the case of “Morpheus,” 2008, from the Down series, the background has taken flight. Based upon the sculpture of the same name by Jean-Antoine Houdon, our present-day god of dreams regards us with a jaded eye, looking up guardedly from under his stiff-brimmed cap, his wings clipped. He’s a come-hither hip-hop odalisque, while the white marble Morpheus’s eyes are closed in demure slumber. 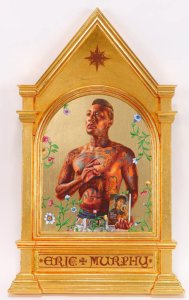 After the Byzantine icon, “St. Gregory of Palamas, 2014, gold leaf and oil on wood, pays tribute to Eric Murphy, gorgeously tattooed and holding the book, Icons and Saints. Angels appear on his shoulder and Eden-like flowers spring from the gold background. Unlike the ambiguous gaze of Morpheus, Eric Murphy seems transported, seeing something in the distant future, perhaps some vision of a world in which beauty and mystery coexist.

Wiley says, “…I wanted to create a body of work in which empathy and the language of the religious and the rapturous all collide into the same space.”

“St. Ursula and the Virgin Martyrs,” 20014, is one of a series of stained glass works (is there nothing this man can’t do? Or should I say, his atelier can’t do? Wiley reputedly has teams of artisans who complete the work once he’s designed and conceived it). Wiley’s Ursula—a young man— retains his 1535 doppelganger’s arrow, symbolic of love, erotic piercing, and sudden death on the streets. His attendants wear period-appropriate garments, while our contemporary figure wears shorts, a patterned jacket, and Timberlands, giving the viewer a strikingly vulnerable gaze which speaks of seeing too much too young. In the upper right corner, brown-skinned putti appear about to pull the whole thing down, hinting, perhaps, of the impermanence and sudden violence of urban life.

The final room of this exhibition is devoted to portraits of women. Wiley himself says that we “really don’t know who these women are.” They’re far from caricatures, but one wishes for more grounding in the here and now. Simply naming the portrait after the sitter (as with St. Gregory Palamas/Eric Murphy) would help to make them more accessible. “Princess Victoire of Saxe-Coburg-Gotha,” 2012, shows a beautiful woman in a designer gown (unlike the casual clothes of the men), her shoulders bare and burnished, her hair in an exaggerated up-do of epic proportion. Her counterpart in Sir Edwin Landseer’s 1839 portrait has equally mannered hair and, by contrast, alabaster skin. Both women face away from the viewer, presumably to display the intricate structure of the gowns, but the pose also to makes them inscrutable. 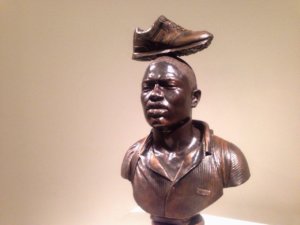 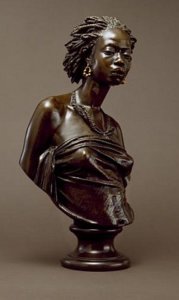 Reflecting on this show, I couldn’t help but think that the subjects of Wiley’s work would be the very last people on earth who could afford one of his paintings, let alone have the space to hang it. I hope that every now and then he gives these (mostly anonymous) people a sketch or photograph to commemorate sitting for him. With great appreciation the artist’s important message, wit, and verve, I came away wanting more recognition for the subjects. I was left with the question: why did the artist use the name of the historical painting or sculpture, and not the name, consistently, of the subject? Does this not deny them some fundamental aspect of his or her humanity? Or does Wiley mean to imply that their “slave names” are as irrelevant as the trappings of power of a bygone era? I’d love to ask him. 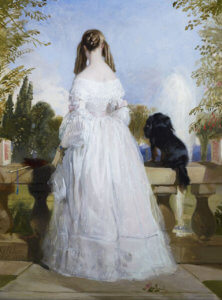 The show will be up at the VMFA until September 5, 2016 http://vmfa.museum/exhibitions/exhibitions/kehinde-wiley-a-new-republic/