“Untitled,” from the Hijab/Veil series, 2011, by Boushra Almutawakel

I was drawn to this exhibit—She Who Tells a Story—at the National Museum of Women in the Arts in Washington, DC, seeking revelations about life in the Middle East. The work (more than 80 photographs and a video installation) is part of the output of a women’s collective called Rawiya (“she who tells a story” in Arabic). Made up of women artists and photojournalists from Iraq, Yemen, Egypt, Iran, and Jordan, the group endeavors to correct stereotypes about women in the region and about the region itself. 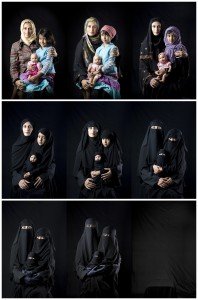 As I walked from gallery to gallery, though, I felt I must be missing something. Many of the images seemed to reinforce stereotypical notions: the veil erases identity, women in Iran are voiceless, and war’s oppression has all but obliterated joy in the region. Could this be what the artists and curator intended? In preparation for writing this piece, I spent hours learning more about these extraordinary women. I was missing something—something rich, varied, complex, and rewarding. Taken as a whole, Rawiya’s work offers a vibrant glimpse into the complexities and rewards of day-to-day life in Iran and the Arab world. I wish the curators for this exhibit had chosen to mount a more representative selection.

Yemeni photographer, Boushra Almutawakel explores the hijab in her series “The Hijab/Veil.” She approached this subject with some trepidation, freighted as it is with controversy and potential for misinterpretation. But after 9/11, the artist saw that Muslims were being “demonized,” or “romanticized” by the Western press, and she decided to explore the topic. I felt an immediate connection to the fresh, open face of the young woman wearing an American flag as a headscarf. Although the artist worried that some Americans might find the image disrespectful, I didn’t see it that way at all. The girl seems to say, “Here I am, take me or leave me, I’m so much like you.”

Another in the “Hijab” series, “Mother, Daughter, Doll,” 2010, shows Almutawakel herself with her young daughter. As each becomes more and more covered, their spontaneous expressions of joy seem gradually to fade, until, in the last panel, they are extinguished altogether. About this work, the artist says that veiling, taken to an extreme, or for political purposes, can become a dangerous way to control women and has “nothing to do with Islam.” Indeed, she faced withering criticism for using her own image in this work, an act considered unseemly in her increasingly conservative country.

Rana El Neuer’s series, “The Metro,” reminded me of Walker Evans’s candid subway series taken in the 1940s. This artist, born in Hanover, Germany and now living in Cairo, created the work to “reflect rapid changes…in the middle class” in Egypt. The women portrayed appear wistful, alienated, or hidden from view, as in “Metro #7,” 2003. The wall text informs us that women are separated from men in Cairo’s subway cars; as the Arabic script over the doors attests. Gloom and despondency seems to haunt many of these faces, as they did in the Weston subway shots. In an interview about another exhibition, El Neuer said her Metro series also included pictures of men and she expressed mild concern that only showing the women’s images would distort the viewer’s perception of the piece as a whole.

Tanya Habjouqa, born in Jordan and now living in in East Jerusalem, gives us modest pleasures in “Women of Gaza,” 2009. These images show everyday moments: picnicking, taking a selfie, doing aerobics, going for a boat ride. They are winsome, sweet, but also telling, given the restrictive environment in which the women live. In researching this artist, I found so much I wish had been included here. Habjouqa’s work is often surreal and slyly ironic, like the furniture salesmen sitting in brand-new chairs by an Israeli security wall, optimistically waiting for business to come along.

At first glance, Jananne Al-Ani’s large image, “Aerial 1,” 2011, appeared to be a rumpled bedspread embroidered with Ws. Up close, you see that it is an aerial shot of roads and structures. The artist, who was born in Kirkuk, Iraq and now lives in London, says the piece “…explores the disappearance of the body in the landscapes of atrocity and genocide and how it affects our understanding of the often beautiful landscapes into which the bodies of victims disappear.” Sobering, to say the least.

More war imagery is seen in Gohar Dashti’s series, “Today’s Life and War,” 2008. This staged series of photographs was taken on a film set outside of Tehran where the artist lives. Everyday actions—watching TV, celebrating a birthday—are portrayed by a couple of young actors in a surreal landscape of perpetual war. My favorites from this group—having breakfast in front of a tank and hanging out the laundry on barbed wire—bring the message home. 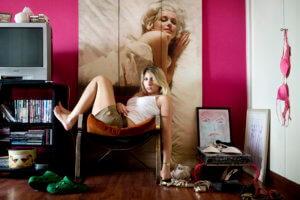 “Christilla, Rabieh, Lebanon,” from the 2010 series, “A Girl in Her Room, by Rania Matar

Switching gears, Rania Matar (born in Bierut, Lebanon, now living in Brookline, Massachusetts) shot the series “A Girl in Her Room,” 2010, to show “…the universality of being a teenage girl and the common bonds teen girls share – regardless of cultural differences.” I would have liked to see some of the photographs Matar took of U.S. girls in their rooms (also part of this series), if only to see that adolescent girls everywhere cocoon themselves in much the same way. A man standing near me in the gallery said to his companion, “These girls could be anywhere.” True. I love Matar’s Lolita-like Christilla with her challenging gaze. I could almost hear my step-daughter saying, all those years ago, “Don’t even look at me!”

Furniture Makers in the Town of Hizma, Palestine, 2013, by Tanya Habjouqa

Despite much in this show that is charming and revealing, I walked out of the last gallery feeling forlorn. Most of the exhibition’s spaces, if not all of them—certainly the largest ones— displayed devastating images of war: bullets, guns, bloody boots and high heeled shoes, a grenade in a bowl of fruit.

I’m not saying that the region hasn’t been riven by war. Indeed it has, and, sadly, continues to be. I’m not saying that images of war aren’t appropriate here; undoubtedly, war has had an indelible effect on the region and its people, men and women alike. All I’m saying is that I wanted more balance in the curators’ choices. For me, their emphasis fails to give the viewer the fullness and humanity of Rawiya’s work.