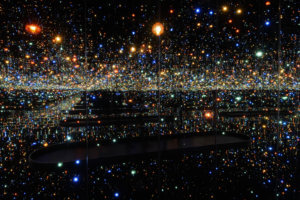 After what seems a long hiatus away from this space, your intrepid art blogger is back, excited to tell you about “Yayoi Kusama: Infinity Mirrors,” now on view at the Hirshhorn Museum and Sculpture Garden in Washington, D.C. This popular show has been mobbed with fans during its entire run. More often than not, timed passes on offer at the museum’s website are gobbled up at precisely noon each Monday. My dear friend Jeanne somehow managed to score two passes.

Despite the hassle of getting to see the show, it’s gratifying the excitement this 87-year-old artist has kicked up, especially among young people. Jeanne and I were among only a handful of older people at the museum last Thursday afternoon.

This exuberant show is vast — more than 60 paintings, works on paper, sculptures, and installations, including six “infinity mirror rooms” in which banks of LED lights, balloons, and the viewer him or herself repeats endlessly in the mirrored walls.

The show opens with a series of striking works on paper, particularly “Pacific Ocean,” 1959, watercolor and ink. This image, inspired by sun on water as seen from a plane, sparked Kusama’s later “infinity net” paintings.

Next, we came to another seminal work of 1994, a phallus-bedecked rowboat in a room covered in black wallpaper dotted with repeating photographic images of “Violet Obsession,” also the name of a small volume of poetry by the artist. 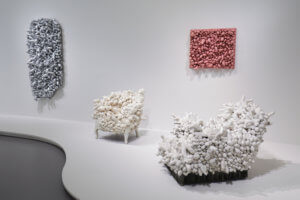 Much of this prolific artist’s work has been shaped by her life-long experiences with anxiety and other emotional disorders that have at times erupted into full-blown psychosis. So fragile is her mental state that she voluntarily lives in a psychiatric hospital not far from her studio in Tokyo. Such challenges could well have derailed her creative career. Instead, the soothing aspect of the repetition and duplication of images formed the basis of her work, spurring her on to greater and greater achievement. And she’s not done yet. She still paints daily, from her wheelchair, with canvasses resting on the floor or tables in her studio.

In an effort to rid herself of her fear of sex, Kusama create whimsical “accumulations” of hand-made stuffed tubers affixed to objects and surfaces. Who’s to say if they helped the artist with her fears? All we can do is enjoy them. 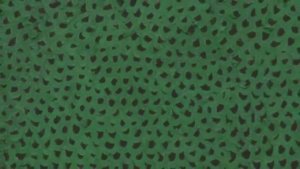 Several large mesmerizing “infinity net” paintings are hung together in the same gallery as the accumulations. Beginning at the age of ten, Kusama began painting repetitive polka dots and nets to calm her agitation due to a turbulent family life. Formed of countless loops, with some paint texture visible and bathed in luminous color, these works are utterly absorbing. Hauntingly ethereal, they form a fascinating counterpoint to the stuffed protuberances across the room. The wall text observes that Kusama’s infinity nets happened to jibe with the “painterly qualities of abstract expressionism and the restraint and monochrome [palate] of minimalism,” both on display in “No. Green No. 1,” 1961.

Waiting line for the first of the “infinity mirror rooms,” (using mirrors was Kusama’s way of continuing her theme of repetition without destroying her fingers and hands sewing and stuffing fabric tubes with kapok), we took in a slide show of the artist’s 1966 14th Street “Happening” in which she appears to pop in and out of a phallus be-decked box. 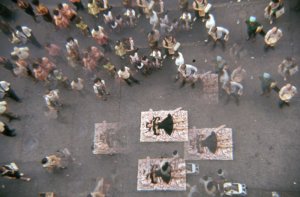 The six infinity mirror rooms on display here create a dazzle of reflections of themselves and the viewer. “All the Eternal Love I Have for the Pumpkins,” 1966, was our favorite. Kusama’s family was in the plant seed business and she remembers being charmed by the dumpling-shaped gourds as a child. The acrylic pumpkins are indeed charming; begging to be touched. We resisted, but evidently one of the pumpkins was damaged by a viewer, causing the show to be briefly closed while curators rearranged the pumpkin field.

Once inside each of the mirrored rooms, our images, along with a seemingly infinite number of pumpkins, phalli, balloons, polka dots and pin-point lights were multiplied to the vanishing point. Viewers are allowed exactly 30 seconds before the next pair of attendees is let in. These structures are fun, make no mistake, but for me, at least, they caused nothing like the enveloping merge-with-the cosmos sensation we were led to expect. Instead, they come off as a side-show/fun house sort of gimmick. And the waits are LONG, my friends. After three mirrored infinity room, one feels like it’s taken at least a millennium to get to the next one.

On the other hand, a series of collages are unexpectedly subtle, moving, and mysterious. Look for “Soul Going Back to its Home,” 1975, a touching homage made for Kusama’s friend the surrealist artist Joseph Cornell who had recently died.

The exhibit closes with the made-for-the Hirshhorn “Obliteration Room.” Each museum goer, or pair of them, is given specially made stickers to apply to the all-white room. Furnished with donated Ikea furniture, books, lamps, and other household objects furnished by museum staff, the room’s surfaces are slowly being obliterated by colorful dots.

If you choose to make the trek, and if the gods of the Hirshhorn’s balky website are with you, bring water and wear comfy shoes, and, of course, bring your phone or a camera. You won’t be able to resist at least one selfie. 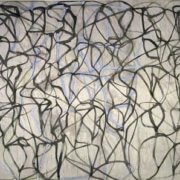 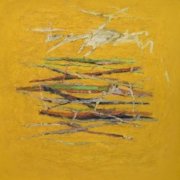 Robert Irwin: All the Rules Will Change 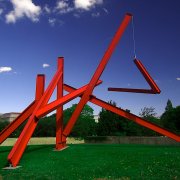